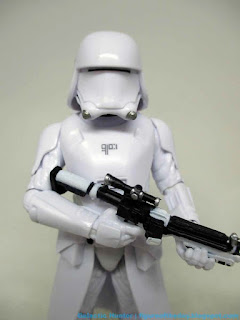 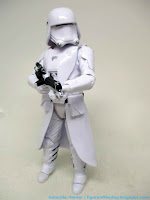 Commentary: When I started writing this column something like 14 years ago, I wanted to do a lot more "whatever happened to" reviews - and now we can, since this First Order Snowtrooper was a 2015 release.  It came out around the same time as the once-impossible-to-find Hux and Asty, which were rerun (you're welcome) before you realized just how low the run really was.   In that wave - and carried forward - was this trooper.  It's a cool trooper!  Hasbro made a bepauldroned version as an exclusive for Toys R Us in 2015, and a caped one for Target in 2019.  You could build an army by being a completist!  The Snowtrooper did start to linger, especially since this version lacks the bells and whistles, and capes, of the other ones.   It's the least desirable of the lot, but it's cheap.

The figure is the same core figure as all three releases, each of which has barely different paint.  It's a white armored soldier with a distinctive helmet and about 26 points of articulation.  Hasbro did a good job with the sculpt thanks to Disney not being stingy with the reference files, and the figure has a pretty good range of movement despite the single-joint style of elbows.  I love the glossy "hard" elements of the uniform on the helmet, shoulders, and chest, while the vinyl kama around the waist just sort of gets in the way.  It's not like this is a really "action"-oriented figure when you take a look at the entire sequel trilogy, and this figure is kind of a good metaphor for the new saga.  It's shiny, it looks like it should turn into something really amazing... and it's fine.  It's probably not going to have the impact on my life that the original gangsta Snowtrooper had back in the day, but maybe it'll influence some kids and a new series of fans when it's time to contemplate raiding what's left of Ralph McQuarrie's sketchbook and swiping frames from other Japanese movies in 2040 when they release Episode X.  Or so I am guessing. 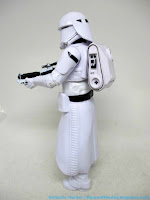 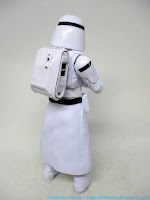 It's a sturdy if stiff trooper with a nifty blaster that's also indicative of its era.  I have little doubt that Disney and Lucasfilm Licensing put their thumbs on the design scale to make the blaster white, so it'd be easier to sell as a toy unlike black blasters.   Toy guns are tough to do these days, even pistol-like phasers from Star Trek Discovery were prototyped and while demand existed, you couldn't sell them in states like California due to gun laws.   And now you've got white blasters on your stormtroopers.   If you're an older fan, this figure is destined to sit on your shelf, possibly in its box, unlikely to be played with and loved like your childhood toys.   Since the free market has brought the price down, go ahead and get this version if you want one of the three First Order Snowtroopers.  It's cheap! Or it was.  I don't know when you'll read this.

Email ThisBlogThis!Share to TwitterShare to FacebookShare to Pinterest
Labels: The Black Series 6-Inch, The First Order, The First Order Stormtroopers, The Force Awakens, The Rise of Skywalker