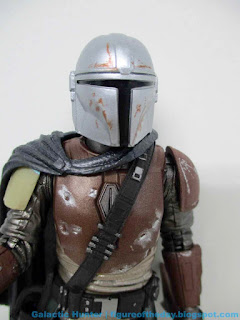 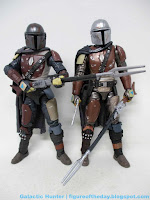 Commentary: When I saw the "carbonized" pictures show up, I was not sold on the idea.  The Jet Trooper, Second Sister, and Sith Trooper seemed superfluous - but The Mandalorian (Carbonized Graphite) was gorgeous.   The silver paint on the metal helmet really sings, even in dark rooms.  The brown metals sparkle a bit more,

To see how the specific elements of the original figure looked, The Mandalorian [FOTD #2,637] is where you'll want to look.  Articulation is still excellent, but the colors changed quite a bit.   While the salvaged Scarif Trooper-esque shoulder and hand armor seems the same, everything else takes on a dreamy root beer quality that looks even better in person.  The grey body suit is now a rich metallic brown.  The shoes still look undecorated and uninspired - but they're there!  Armor that was previously a dull prison grey now dazzles as a metallic blue, and the metallic armor paint looks even better with the silver  battle damage against it.  While it's not as authentic, it certainly feels like a massive improvement over the standard release.   If you're the kind of person that just collects weird variants, this may be a good sub-line for you. 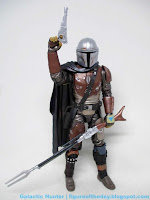 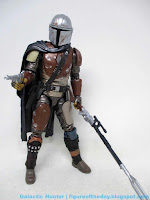 Accessories are pretty much more of the same, but brighter.  The silver pops more, the brown is more of a copper, and even the cape sparkles a bit.  Due to form fit issues, Hasbro's decision to paint the peg on the rifle means you should not try to put that peg in the figure's back hole - it may scrape the paint.  It's too tight, and painted pieces should not be shoved in holes as there are rarely sufficient tolerances here. 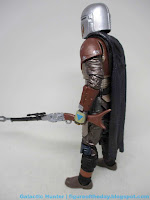 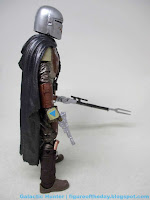 The Black Series decided to drop the "black" from its packaging for a lot of special 2019 releases, and this is probably the very best of them.  The orangey-brown shiny finish shows fingerprints like nobody's business, but the hazy coloring really drives home the "carbonized" and "carbonite" motif.  The silver side panel is a mirrored finish that shows scuffs and grubby hand marks, but it really is a gem.  The packaging and figure really sell the idea of "premium" - and at five bucks more, it better look gorgeous! - making this the only one of these chase figures I would actually recommend chasing down, given a fair price.  It made me appreciate the regular release more with certain elements popping out that just faded in the original figure, so kudos to Team Hasbro for improving on something that was already pretty spectacular.   You should get both releases, just to see what paint can do to improve these figures - and how Hasbro can undoubtedly improve them some more.