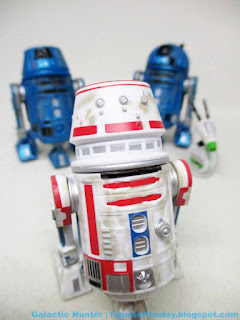 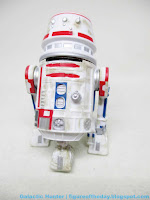 Commentary:  I'm never quite sure how to rank some of these droids lately. They're not bad, but are they essential?   R5-J2E looks a lot like multiple droids we've already bought, like the famous R5-D4 and the decidedly less-famous R5-D8 (Porkins' droid.)   The background Resistance droid R5-J2E looks a lot like some interpretations of both of those droids - mostly red panels on the body, blue panels on the legs, and some dirt and grime.   I'd say it's significantly more interesting to look at than most existing Hasbro and Disney interpretations of those robots, in part because they added more deco to it.

The same build-a-droid mold is back - no foot wires, but you do get wheels - complete with the newish "restraining bolt body" we last saw with R5-232 [FOTD #2,516].  The restraining bolt adds some nice visual flourish, as does a dusting of dirt on all sides of the droid.   While it lacks the antenna - such has been the curse with all R5 droids at Disney - it's pretty close to the movie design otherwise.  You'll find the unique red patterns on teh shoulders, as well as some extra red around the bottom panels on the front of the figure.  The dirty run-off of soot on the lower body is absent, and the figure is overall cleaner than in the movie design.  The alternating silver-and-white boxes below the dome were also not implemented in the same way, so it's close - but not exact.  R2 units being slightly off-model is a proud tradition in action figures, dating back to the surprisingly accepted 1978 original R2-D2. 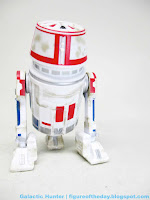 Given the confines of what Disney typically does with these figures (especially at the price point) this is a good set.  You don't need another red and white R5 unit - if you're a completist you're drowning in them - but at least those extra red stripes on the dome and one of the panels on top being painted black with a silver ring add some visual flourish.  It certainly gives the idea that these are a mass-produced product in these movies, with variations in design over the decades in service or customizations by the customer.   The current trickle of Disney droids has been slight, but good - under a dozen per year with a $30 four-pack is a good thing.  The $80 1-in-4 variation in the new Disney Rise of the Resistance vehicle boxed set is a real kick in the shorts, though.