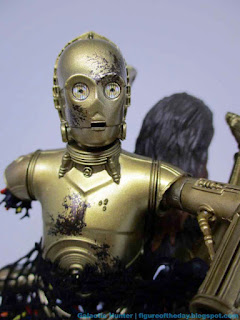 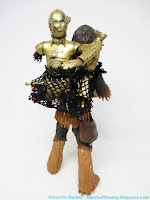 Commentary: We looked at the Wookiee it's Chewbacca & C-3PO droid day!  I haven't written one of these for a while thanks to frontloading the column for Toy Fair and the post-Toy Fair malaise, so now it's time to look at everybody's favorite robot, who filled the role of most hated character in the franchise for a few weeks early in the era of the original trilogy.  C-3PO is great. 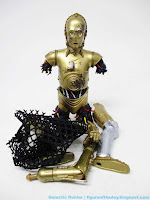 We have had several C-3POs so far.  There have been two different flavors of red arm from The Force Awakens, there's an all-gold one from Galaxy's Edge that does double duty as Revenge of the Sith and the non-red-arm parts of the sequel trilogy, and we've also had a 40th Anniversary/Walgreens one that's an all-purpose original trilogy C-3PO.  This one gets more specific, taking the best of that mold (and its remolds) while adding new functionality to make this a C-3PO that is undoubtedly different enough to make you mad.

C-3PO (2019) has removable limbs - you can pull off arms and legs, replacing them with a toupee of wires that allow you to simulate battle damage.  The figure has open hands, a silver leg, and lots of dirty deco on the head and chest.  It's a blast!   The only thing it's missing is a removable back panel, so you can't pretend to have Chewbacca do repairs on him when he's backwards.   Aside from that, he ticks all the major boxes - it's a good C-3PO, he can be carried around in a mesh net bag, making it the 6-inch update to Kenner's 1982 "Removable Limbs" C-3PO.  It's good, and if you only get one C-3PO I'd nudge you toward this one. 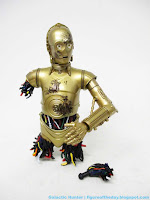 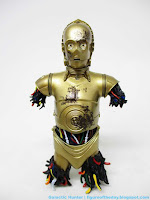 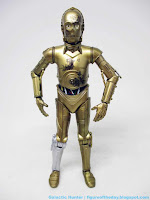 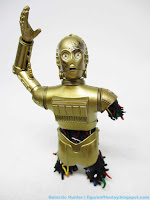 BanDai makes a 6-inch scale figure (which I don't have yet and can't size-compare) with the removable back panel and a vac-metal finish - so if you need one for your display get that 1:12 scale BanDai kit.  Or both.  You'll probably get both.