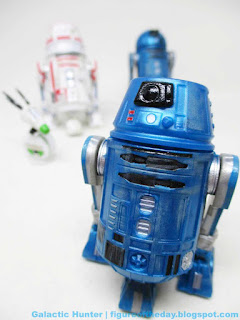 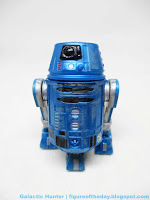 Commentary:  If you liked R2-SHP, then R6-LE5 is more of that.  The same color and body are here, but the dome is different - the unique R6 shape has been added to the same, admittedly nice, droid form.  The metallic blue sparkles, and the silver and black with a light dusting of grey do make for a figure that pops in almost any diorama.

The black central eye is augmented by a white circle, a couple of red boxes, and some minimal detailing on the back.  It's pretty simple, but the shape is good enough that you probably won't notice.  The plastic metallic swirl does most of the heavy lifting in terms of bringing this figure to life, which gives it a look that's probably more metallic than if it were actual metal.  Articulation is standard modern Droid Factory fare, with removable legs and dome.  You get about five moving parts in all, with the exposed mechanisms under the dome all matching blue.  We've slid a bit since Hasbro started doing these, silver and other colors under the dome really did add a lot of detail while bringing these to "life" as real fake space appliances.   At least the BB unit cores still have some color... and a few colors of paint for added interior detail. 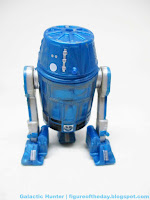 It'd be great if this figure wasn't nearly identical to another figure in the very same set, but given the asking price it's not exactly terrible - even if you consider D-O a freebie.   If you can find this set, I'd say it's well worth the $30, and if you were buying individual figures some fans split up on eBay this one is particularly nifty given its colors and distinctive dome.  It doesn't do anything your dozens (hundreds) of other droids don't, though, so don't feel too bad if you missed it.