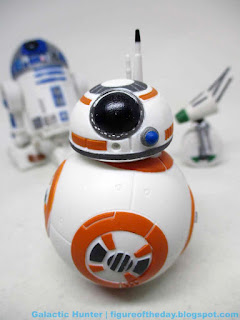 Bio: BB-8, sometimes spelled and pronounced Beebee-Ate and nicknamed BB, was a BB-series astromech droid who operated approximately thirty years after the Battle of Endor. (Stolen from Wookieepedia. Packaging has no bio.) 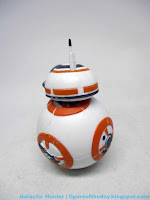 Commentary: While initially the darling of Disney's reign of Star Wars, the once invincible BB-8 went from being the selling point to toys across all price points to a lesser, former cute character.  Baby Yoda stole his lunch before The Rise of Skywalker hit theaters, but fans moved on pretty quickly - by 2018, new takes on RC droids and playsets and all sorts of goodies.   This 3-pack was a nifty innovation for the final saga sequel, giving you 3 pretty good figures for $15.

BB-8 doesn't do much - but these figures typically don't do a lot.  He has a springy flat base below the round ball, which has been great to serve as a sort of a kickstand to prevent him from rolling off of a flat surface.   The very clean droid has a head with a giant eye to make the figure appear cuter, and he sports a lone ball joint a the base of his dome.  He can look up and down and all around... and that's it.  There are no vehicles in which to mount him, no playsets to make use of the "foot," or anything like that.  It's just a good-sized, decent-looking, and certainly A-OK take on the droid. 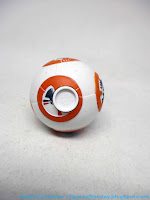 Target stores were loaded with this set prior to the movie's release, and the secondary market shows that enthusiasm was softer than retailers predicted.   It's a shame - it's a good set with the three non-speaking droids in good form at a perfectly acceptable price.  The set is undeniably made by people that understand the need for figures to stand up and look good, but the droids got the shallow end of action features.   At clearance prices - as low as $7.50 as I write this - I would recommend this as an impulse buy for you and all your fan buddies.   Even at $15, the set is a good example of Hasbro making something good at a fair price - it's just not the scale you readers tend to demand.  When it comes to toys for the sake of toys, this BB-8 is a good one - but if you're happy with your BB-8 droid pool, you probably won't have much use for one more.

He has an action feature! You can pull the tool bays out on opposite sides and there are grapnel lines that will spring back into position when you press him down onto his flat base! He's more fun thn you thought, right?
I love this line and would love to see more releases trickle out. :)