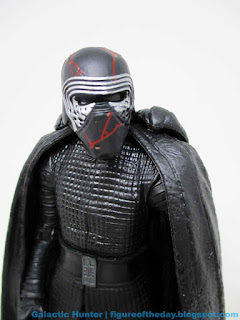 Bio: As Supreme Leader of the First Order, Kylo Ren wields more power than ever before. Nevertheless,  Ren continues to search for secrets of the Force from the depths of the dark side.  (Taken from the figure's packaging.) 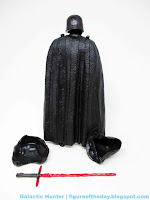 Commentary: "Is this figure any good?" is basically what I'm always getting at in this column, and it's weird to be in a position where we've been saying "well, it's complicated" for a while now.   This Supreme Leader Kylo Ren is something you would love if you found it on clearance, but probably be annoyed by at full price.  The 2018 The Last Jedi figure's body - used for a basic figure you can get for around $10, in the Galaxy's Edge set, and also a Walmart exclusive Throne Room set all of which are basically the same save for some head changes and other accessories - well... here it is again.  Hasbro may have gotten as much as $120 out of you for those previous three releases, or less if you got the non-Disney Park ones on clearance, but it's still a lot of money.  Seeing the same costume again is kind of a bore, even if we do get a new helmet and updated to the cape and hoods.  The body is the same, the lightsabers are the same, and yet it seemed to sell just fine this time around.  What I say is moot. 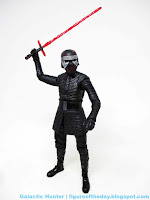 First, let me sing the praises of that new cape.  I like it.   Hasbro has struggled with cloth cape hoods for years, particularly in the 3 3/4-inch scale.  By leaving them out of most of the 6-inch line, they've generally not been a problem - Mace Windu got a cloth one, Darth Maul got a plastic one, but it's this Kylo Ren cape and hood that seems to have figured out how to do it right.  The cape itself rests gently over the same black shoulders, but the back of the cape has a couple of posts on it where you can plug in one of two hoods.  A raised hood and lowered hood give you some choice as to how you want him to be displayed, which is good given the "back to one" nature of the movie.  I'd like to see Hasbro consider this kind of cape/cloak hood system for future Jedi, Sith, and other figures where appropriate.   (The revised throne Emperor's plastic hood with cloth robes was also a winner.)  Kudos to Hasbro for deploying a good improvement here. 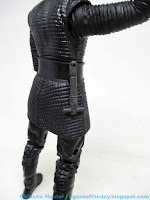 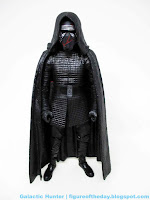 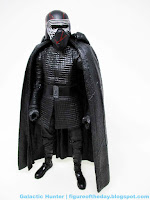 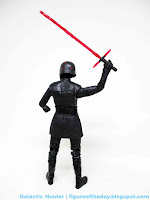 The lightsabers are nothing new or special.  There's a slot on the belt, you can plug the hilts in there, or Kylo can hold them in his hands.  The deco is fine, there's not a lot going on new here.   They're fine, they fit, that's all I can ask for short of a metal hilt or some new innovation in tiny electronics.

The body has the same 27 points of articulation you got last time, but you get a new reforged helmet - and that's arguably this figure's selling point.   The red lines look cool and are a new sculpt - or at least revised tool - to simulate the work done by Flash Gordon's Ape on Mustafar.   (I don't know the name but I would like to see a figure of them.)   The figure poses great and looks fantastic - if you don't have the previous versions, this is a good one.  If you have the previous  versions and are a completist, well, yeah.  This is our curse, isn't it?  It's fine.  It's not bad.  It' just not new.  It is a good figure.  It is not a bad figure.  It's just now a terribly new figure for when it was released just a few months ago.

Email ThisBlogThis!Share to TwitterShare to FacebookShare to Pinterest
Labels: Kylo Ren, The First Order, The Rise of Skywalker