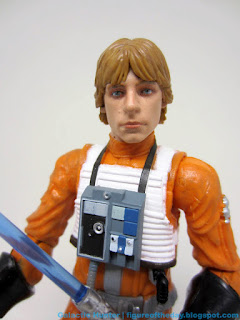 Bio: Luke Skywalker uses the power of the Force and his piloting skills to destroy the Death Star.  (Taken from the figure's packaging.) 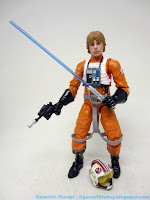 Commentary: We didn't review the original 2013 release of Luke Skywalker (Pilot) (yet), so let's look at this one.  Reissued in 2017 for Star Wars Celebration with no changes, the original release of this figure - and indeed the first wave - was a dud, blown out on Amazon for significantly below retail after the first holiday season. It was typical wave 1 syndrome, but thanks to collectors hopping on board after Darth Vader came out, these guys eventually received significant demand and then people started to care.  For $13? Nobody cares. As soon as someone says "No you can't have it?" It shot up. 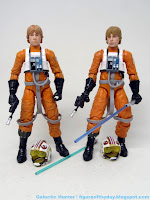 This 2018 release is pretty much the same as 2013, but with a couple of changes that may be enough to make you care.  The helmet deco is a little sharper and straighter.  The orange is a little more vibrant.  The boots are a tiny bit shinier.  The ankles were retooled, a seemingly different "click" positions (for the worse) on the new version reduces the precision of how you can pose it compared to the 2013 release.   A "CE" has been added to the back of the left boot, which is actually the front of the left boot, Hasbro just tooled and assembled it wrong for the 2018 version.  The blue hue of the lightsaber blade has changed.  Most important of all, the portrait has the new "photo real" deco on it, adding a lot of definition to his eyes and lips, giving him a look that's a little bit Holiday Special, a little bit ca. 1969 Iggy Stooge.

With roughly 29 points of articulation, this is (and was) a good figure. The blaster has a nice painted muzzle, the lightsaber hilt was good enough to reuse a few times, and if other pilots were this short I'm sure we'd have Biggs or Wedge by now.  Hasbro was given a great sculpt, but getting Luke's skin right has always been a challenge.  Thanks to the pink lips and glossy eyes, the skin being just a shade darker really makes this figure look a lot more lively to the naked eye.  Photos studios and macro lenses seem to goth him up a bit, but in almost any normal environment he looks about as good as he ever could.  I'm not saying you couldn't paint it better, but I certainly couldn't. 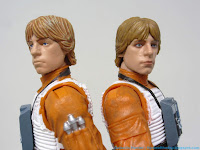 Given the letters added to the back (actually front) of the boot and difficulty posing the ankles, you might want to keep the old 2013 body and swap heads.  Of the two I prefer the 2018 look overall, but the stability and range of motion in the 2013 ankles is tough to beat.  Also the head is better in 2018, so really, who am I kidding? Just get this new one.  It's the most changed of the first wave of Archive figures, and given the secondary market prices will no doubt be the one anyone late to the party will want to add to their stash. I should note, the packaging adhesive is fantastic and it sticks without added tape - that's a big deal, as Hasbro has had steady tape problems since 2013.