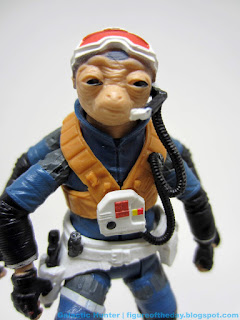 Bio: Rio Durant was a four-armed Ardennian pilot who lived during the reign of the Galactic Empire. Durant carried out dangerous missions alongside the scoundrel Tobias Beckett for years and was good-natured and up for any challenge.  (Stolen from Wookieepedia.  Packaging has no bio.) 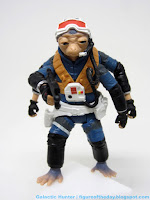 Commentary:  As time goes on, I increasingly feel that the fourth (and possibly final) wave of Solo: A Star Wars Story action figures is a minor miracle.  Ticking off most of the movie's major faces, we get Han's first crewmates like Rio Durant.  He appeared in Funko's line early on, which is becoming the de facto line of record for collectors as no one line in particular seems inclined to be the definitive scale.  The 3 3/4-inch line is and always will be my favorite, and with just a little work it could be complete.  (Hasbro's new Star Wars team lead: call me. I can help. Or better yet, you can make me the team lead.  I have been experienced. I have. I have. Let me prove it to you.)

This is the kind of thing dorks like me dream of - blue-suited four-armed space monkey, voiced by Jon Favreau, in the era of the early Empire.  It's like something out of a Droids cartoon fever dream, and it's real. It's totally real, and it's on my desk as I write this.  This is the kind of thing I hoped we'd see more of in the prequels.  And then in the Clone Wars and Rebels series.  And then the new movies.  It didn't happen - stuff was largely coloring in the lines with a lot of similar droid types (who didn't get toys), nifty new flight suits (that also didn't get toys), and that one girl that totally looks a bit like like Olivia Neutron-John.  Trust me, that reference was on point and relevant.

The short figure stands about 2 3/4-inches tall, so he'll see eye to eye with things like Prime Masters, Pheyden, and Imaginext toys.  He has four arms jointed at the shoulders and wrists - that's eight points of articulation right there - plus a jointed neck and hips.  11 joints help make up for the fact that it's not a big guy, and his only accessory is a small blaster that slides in his holster.

I love the creature's flight suit.  Little coiled areas, multiple colors, bands, ape feet, the vest, everything just screams retro Star Wars minus the fact it isn't totally filthy. I love the goggles and the dynamic pose, as the wide toes seem to help the little guy keep upright. I appreciate stability somewhere in my life, even if it's just on a space monkey on my desk.  The eyes are smidgen off-center on my sample, but that's life.  I still love it.  The arms move nicely and I really wish I had some more ships for him to steal.

This figure is the thing out of a child of the 1970s' or 1980s' dreams.  You wish you had this as a kid - it would go great with your space faring Adventure People or mini-rigs.  It is wonderful and imaginative, something wholly different than the other thousands of figures Hasbro has given us over the last two decades and change. I hope it becomes easy for everybody to find, because it's just fun.  More of this please, Lucasfilm and Hasbro.  This is why I'm here.  This is why you're here.

Force Link 2.0 Notes: "Are we sure about this?"  "Remember, it could always be worse.  And usually is." "You can count on me." "I am not backing down." "Here they come!" Blaster bolts.  It's a soundalike, but I'll give them points for good quotes and a good accent.