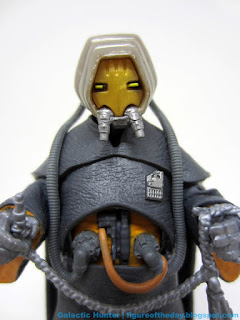 Bio: Quay Tolsite was a male Pyke capo who administered the Pyke Syndicate's operations on Kessel. He was a ruthless individual who enslaved several sentient beings, including Wookiees, to work as miners at the spice mines of Kessel in order to acquire spice for the Pykes. In 10 BBY, Tolsite participated during the raid on Kessel, where he was murdered by Qi'ra.   (Stolen from Wookieepedia.  Packaging has no bio.) 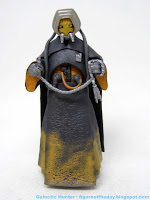 Commentary:  I live for weird aliens and I love alien gangsters and crooks.  Quay Tolsite delivers us our very first member of the Pyke Syndicate, a group of thugs that have been kicking around for a while but haven't made the transition to toys until now.  Along with Black Sun, the Fromm Gang, the Hutts, and so many others we're not left wanting for space crime organizations.  For toys, sure.  But we've certainly got a lot of families out there.

As figures go, this is a wonderful and infuriating collectible.   Normally I judge these things based on certain low-level requirements - can it stand, can it hold its accessories, should it sit, and can the joints work?   In this case - yes, yes, no, and... kinda.   Hasbro did a marvelous job translating the design to a collectible statue that has all of the range of movement of a bowling pin.   The head can move, the arms can be nudged a but, but thanks to the keys and the robes you won't be moving the arms or legs very much. The pose in the packaging is very much the figure, so what you see is what you get. There are separate legs and extra layers of molded robes, but why?  It looks nice, but they aren't functionally useful.  The sculptor did a marvelous job.   It's just that none of those points of articulation are worth anything.   I've made the argument in the past that sometimes 5 points of articulation are enough - in this case, you've got a figure where a "Vintage" release would have probably been a miserable waste of effort.  This is good enough, and as movement goes it's not all that good.  He stands and looks cool - so at least, as a collector, you've got that.

I love the deco. We don't get the glowing eyes on the mask, but we do get an ashy robe with hints of flame from the minerals gathering on his robes and boots.  If you part the legs, you'll see painted grime and molded orange boots.   I love that the robe lining is painted as well, as the textures and detail give us a beautiful figure of a bad guy who gets murdered pretty darned quickly.  All he can do is stand there and hold his keys, in the open, so anyone could take them.  He's practically asking to be taken down.  I like this one a lot - it's goofy, alien, and different enough from my thousands of other figures that I can say it was a most worthwhile acquisition. 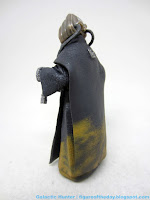 Let's also take this opportunity to remind anyone reading that there might be real value in introducing a simpler, lower-cost assortment.  Figures like this one don't really benefit from most of their articulation - there are opportunities to cut costs right there.  Keep the neck and maybe the shoulders, but lose the legs.   Similarly we could probably see some awesome Jawas without jointed legs, or Battle Droids with limited paint, or any of a number of reductions that - along with the lack of a Force Link chip - could probably knock a buck or two off the retail price of these figures.   This is a collector figure in a kid line, and I'm grateful for it - but I can also see room for Hasbro to make these friendlier to kids while probably also courting the ire of those who demand ankles on a figure that will ultimately have the range of motion you get from a salt shaker.

Buy Quay Toslite. You'll be impressed by the amazing pleather texture of his robes, the wonderful coloring, and even the cool helmet.  Heck, the rope on his accessory is surprisingly nice in terms of its sculpting.    The back of his robes have signs of scarring and damage.  It's a good design that made a cool collectible, but I do believe young Adam would have been very disappointed by its lack of vehicle compatibility.   This is an action figure without action, standing perfectly while looking awesome.  And not much else.