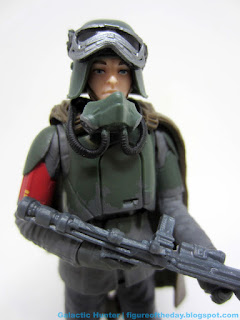 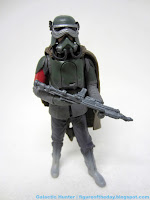 Commentary:  While the single-carded figure is shortpacked, Han Solo (Mimban) hit Target stores as part of a 6-pack first.  Unless you are a packaging completist, this might save you some hassle.   The figure is pretty much the same as the Mudtrooper [FOTD #2,532] with some different deco and less glue.  This version of Han has 7 points of articulation, as Hasbro gave him wrists to best use his blaster.  The blaster is also slightly different - there's an added grip on the front of it.  It's a different mold!

With the same armor as before, let's pay attention to the head.  Those goggles can be moved up or removed, and you can pull down the breathing mask.   This lets you see Han underneath, or you can keep him wrapped up to use as a generic trooper - it's nice to have options.    Han has a red band on his arm to indicate his rank, but is otherwise visually very similar to the unnamed Mimban Stormtrooper from the boxed set.   He stands, he can hold his gun, and he looks pretty good.  For fans of Imperial stuff, you're going to want this. 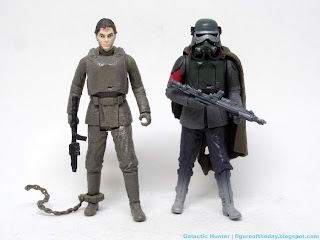 While he doesn't look much like Alden, he looks a lot like a trooper.  That has to count for something. I assume he'll be in decent demand since the single figure is shortpacked, and the boxed set is in pretty ample supply thanks to it not being cheap.   I'd recommend this one if you liked the movie or Imperial stuff, or you could just get the Glyos DSG STS Commando.  Heck, get one of those too.