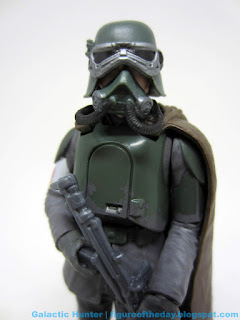 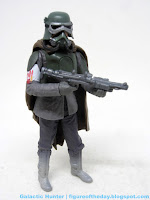 Commentary:  I know it can be hard to advocate for paying full price on an expensive exclusive, but with Solo Hasbro has done a pretty swell job. Most of the toys are smart reused of molds, with unique deco and tiny changes that make re-buying another trooper somewhat interesting.  Hasbro is getting a fair amount of use out of this Mimban Stormtrooper, which is also Han Solo in this set and will be sold as Han Solo individually later.   The deco is different, and the helmet is glued down so you can't see it's Han under the barely-different mask.  The shoulder band rank marks are different, but they're two spins on the same tooling that are different enough to be worthwhile.

The head under the helmet has painted hair, but eyes and other details remain unpainted.  Without a flashlight, you'll probably never notice since the helmet looks nice and is affixed in place.     This "stormtrooper" has no problems standing, sporting 7 points of articulation and a pose that works.  The wrists rotate to better hold the unpainted blaster, and there's mud on the boots.   The armor is similar to General Veers', maintaining a level of continuity between the brass and the soon-to-be-dead cannon fodder by adding the helmet.  It's some poor schmuck who probably isn't going to be doing a whole heck of a lot after he dies face-down in the muck.   Oh, fate.  You are cruel.

The helmet and mask don't seem to be glued down completely straight, which is annoying.  It's a good figure otherwise, with a cape that plugs into the shoulders and a helmet that plugs into the back of the armor.  I like the colors, I like the detail, and it's decent.  You may find more impressive figures with more articulation, but sometimes you get one like this that gets the job done.  Maybe we'll see super-articulated versions later, but Hasbro delivered a pretty good set for a price I would call acceptable.  $7.50 per is slightly better than individual figures, but it's not a bargain - it's certainly good enough.  That seems to be the theme of this set.  Grab it if you can, especially if it's on sale - get two then.

Force Link 2.0 Notes: "Troopers, to me!" (I think.)  "Prepare to engage." "For the glory of the Empire!"  "I need covering fire." Blaster sounds.  The voice is a soundalike of some random dude.

This Mudtrooper medic is a worthwhile variant. Are you sure it's a complete reuse of the Han tooling though ? The goggles and helmet are a single piece (not glued) while Han's are separate.