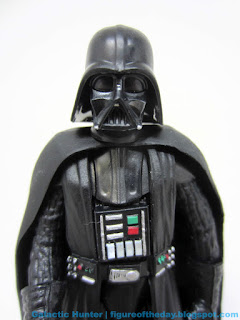 Bio: During the reign of the Galactic Empire, he was known as Darth Vader, Sith Lord and apprentice to Emperor Darth Sidious. (Stolen from Wookieepedia.  Packaging has no bio.) 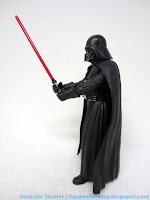 Commentary:  It's new. Darth Vader is more or less guaranteed to get a new figure every couple of years now, and it's nice that this one is different.  Based largely on the suits from Rogue One and the original Star Wars, it's notable that it features some added silver detailing on the helmet - the silver cheek is rarely colored in, and it's a detail I didn't even realize was present until recently thanks to how most photography shot the helmet.  It's nifty! The silver neck and chin are left black, though.   Hey, it's a start.

With swiveling gloves with horizontal ribbing and robes over his chest armor, it's definitely the earlier version of the Sith Lord.  The arms swing forward and can double-grip his lightsaber, and the detailing is great.  It's no longer special to be great, as Hasbro does a good job and you really can't make a fuss over "normal" being really impressive since it's normal now.   The deco, though, is quite nice on the armor. Each individual light and detail seem to be crisper and cleaner than usual, with better paint masks and slightly more vibrant colors as appropriate. Rubbery robes over his shoulder armor give him a little more visual heft, with nice flowing robes and legs that swing forward acceptably.  He's not going to go on any starfighter outings, but he'll look cool standing around. 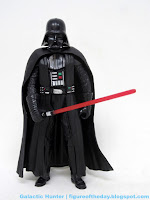 I'm not going to lie to you - you don't need another Darth Vader, and there are better ones.  This one is plenty good though - Hasbro made some smart design decisions that make this one look significantly different from every one that has come so far, and is better than so many of them.  If you're happy with your existing super-articulated figures, you probably don't need this one - but perhaps the better chest and belt detailing combined with a really good helmet may be enough to tempt you to throw down a few bucks for one more.  I'm not complaining - this is a good one.  It's just that whenever we get a new sculpt of Darth Vader, it's a reminder that another new character we might have had, in some alternate reality, failed to come to fruition.

Force Link 2.0 Notes: "Don't underestimate the Force."  "Prepare your troops for a surface attack."  "There will be no one to stop us this time."  "It's useless to resist."  Also lightsaber sounds and clashes.  It's pretty close to the one that came with the Probe Droid last year.