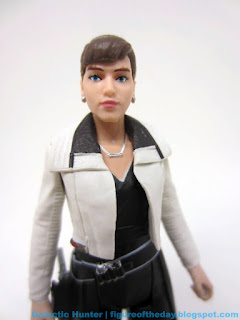 Bio: Qi'Ra put her life as a powerless street urchin behind her, and has managed to move up in status and reputation within a prominent criminal organization. (Taken from the figure's packaging.) 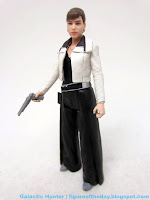 Commentary: This is a good one. I really liked the costumes for Qi'ra (Vandor-1) in Solo: A Star Wars Story, the greatest comic book that was actually a movie.  There was a lot nifty in it, but given its scope I've basically just taken it as a really good piece of the Expanded Universe, but in movie form.  We got a lot of nifty stuff, and this is one of the figures I was really hoping we'd get.  (Although I was hoping she'd have the cape, too.)   Hasbro did a nice job translating the costume's awesome jacket and cool pants (with holster) and a pretty wonderful portrait.

The pants and jacket both feel like something out of the 1970s, or what the 2010s think of the 1970s. They're wide-legged, with a jacket that looks sort of like Luke's jacket from the medal ceremony in the original film.  The hair looks perfectly reasonable, as does the jewelry. There's a necklace, a ring, and a bracelet in addition to various adornments on the holster and jacket.  And she can sit! 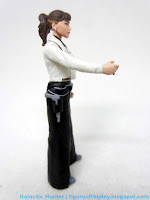 To the naked eye, the face looks great.  Under a macro lens, you can tell the sculpted mouth does not quite match the painted lips.  My advice - don't use a macro lens when you get yours.  Enjoy the lie that she looks fine when you look with your own eyes.

This feels like a  natural evolution of what a good figure from the 1980s could be.  You get a holster, a good sculpt, and slick paint - but you don't get rocker ankles or anything like that.  Given how figures have moved from being a toy for kids to a high-end collectible and everywhere in between, this seems like a good compromise.

Force Link 2.0 Notes: "Always stay in the game as long as you can!" "Everybody serves somebody."  "Trust me - I actually have a plan!" "I could use some backup here!"  Blaster shots.  I believe it might be a soundalike, but it's a decent one.