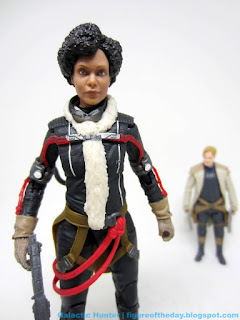 Bio: A no-nonsense and occasionally prickly woman who is a crack shot with a blaster rifle, Val may be the most even-headed and capable member of Tobias Beckett's ragtag crew of scoundrels.  (Taken from the figure's packaging.) 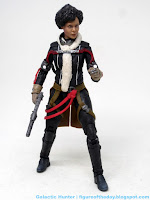 Commentary: Hey it's Thandie Newton!   The short-lived Val managed to sneak a 6-inch and 3 3/4-inch figure out before Solo got put back into the theoretical vault as these selling seasons tend to be short.  I'm surprised to see so many characters come out, and it's cool to see Val in her cold weather gear with all the various bells and whistles - and cords and belts.  There are clear conduits over her jacket, a scarf, and other little design elements that make this look like it could have been out of the 1970s.  Heck, the hair does that too.  There's a power pack on the back, and a lot of subtle detail sculpted in the fabric/plastic.  The face printing has improved significantly since the first figures about a year ago,  with bright glossy eyes and lips with eyebrows that look a little more realistic.  The cheeks and other detail really brings out the life in her face, making this one of the better faces in the line.

Goggles with clear lenses around her neck are a better-than-expected detail, but aren't an actual working accessory. They're just there to look cool, as are the metal coverings on her fingers on her gloves.   There's not a heck of a lot new going on here, but the detailing is excellent given that this $20 figure comes from a movie a lot of fans didn't bother to go see.  Hasbro didn't cut corners here, and I'm glad they seem to be ticking the boxes of most of the major players from each of the Disney-era movies.   I'm hoping we see more figures with this level of detail and the better-than-average portraits as time goes on, as that seems to be a great way to distinguish these figures from other brands and other manufacturers.

Get yourself a Val. I don't assume we'll see another one any time soon, even if that Trooper costume would be awesome to have, too.