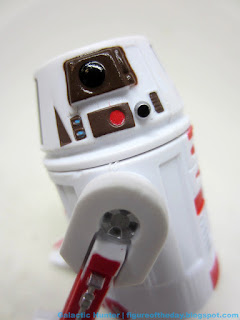 Bio: These figures do not have specific packaging or configurations.  As such, we will be treating each dome as a unique "figure" as that part is the most plentiful.  While Hasbro had said they didn't design the first batch, they included Hasbro copyrights.  This batch does not - markings read "© DISNEY" and "© LFL" as well as "China" on each leg.


Commentary: I both love the idea of Disney's droid bins and utterly detest them.  We haven't seen many new astromech parts thrown in since 2015, one of the last of which was this R5-Series Astromech Droid.  It's distinctive in that it is one of few domes, so far, with no matching body.  The brown dome exists by itself - I opted for a red-and-white body because it vaguely reminded me of Coca-Cola.  It's a neat dome, but it doesn't really match anything and I couldn't place it in the movies if it made an appearance. 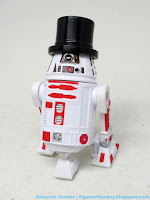 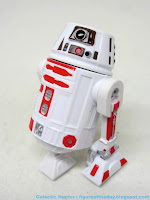 I have a lot of unreviewed Disney droids still, and they get to be hard to review other than saying "here's another one." In this case... here's another one.  It wouldn't stun me to find out, someday, that this is a scarce part people didn't buy because it didn't match anything at the time, but I might also find out there's a brown body I missed. This might be an ideal capper for customs, mismatched, or other weird droids because in and of itself, it doesn't seem to fit - but at least it's unique and a distinctive color. Get it if you're a completist.  We'll look at some of the better ones real soon - we've got a long way to go with these guys.

Collector's Notes: I got mine from Shannon who did me a solid at Disneyland.