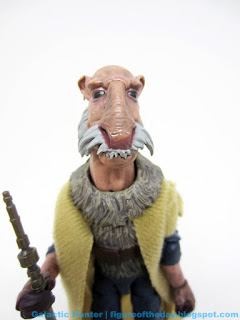 Bio: Saelt-Marae was a Yarkora who worked for Jabba Desilijic Tiure, a powerful Hutt crime lord. Posing as a humble merchant, the Yarkora mingled with the various denizens of Jabba's fortress on Tatooine, learning of the intrigues developing behind the Hutt's back and revealing those to his employer. (Stolen from Wookieepedia.  Packaging has no bio.) 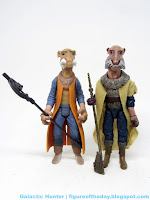 Commentary:  I'm old.   I'm old enough to remember when finding out people were spending $60 for a Yak Face was obscenely expensive - and old enough to remember when, in 1997, Kenner made a new one and called it Saelt-Marae that it seemed silly.   A recognizable but largely obscure alien, this figure's main claim to fame is being a vexing goal for a collector in the pre-internet world.  You could get one by mail, maybe, or at an antique show.  It was unlikely you would see one in person - nobody really took Star Wars seriously as a "Collectible" until around 1990.  A few weirdoes would trade and buy stuff because they loved it - and indeed, I was one of those weirdoes that remembers tracking this stuff down in Toy Shop magazine, or at garage sales, or the occasional antique show or toy swap meet.   It's for this reason that I get a perverse pleasure from taking a Return of the Jedi-carded figure and ripping it off the cardback.  It's not an opportunity I expected to get.

Yak Face 2018 takes design cues for the movie and the original 1980s Kenner figure, largely ignoring the color decisions and some of the proportions of the 1997 figure.   The figure's coloring more closely matches the original, with a skiff staff that's the same basic model that you saw in the 1984 Nikto and Barada figures.  (Some European Yak Face figures had gaffi sticks, or no weapon at all.  It's true!)  The figure retains the hairy collar and fuzzy shirt, with blue sleeves and matching pants.  His skin has a lot more color, with a nose that has a bit of a shine on it.  Hasbro clearly decided to put more value in this one, with more paint applications on the furry parts and claws to make it better than previous releases.  The cloth robe takes some getting used to, but I like it.  I also like the wispy facial hair, black eyes, and abundant articulation. 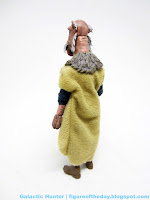 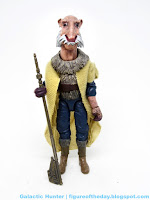 The previous two figures had 5 and 6 joints - not a lot.   This one has a whopping 29 points of articulation, with two joints on the neck, bend-and-swivel wrists and what may well be the finest hip joints we've seen out of Hasbro in ages.  It would be conceited to say Hasbro must be reading our reviews... but it wouldn't surprise me.  You can enjoy lateral hip movement, knee joints, ankle joints, and largely unrestricted hips allowing this figure to sit at a proper 1980s vintage right angle. 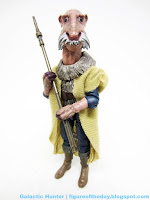 Part fancy lad or bizarre British lord caricature with a healthy dash of Joe Camel, the figure exists purely to please a certain kind of fan.  You might be getting one with your Sail Barge this year, if not you can get this version. I assume this is the more common version - but we'll have to wait and see.   I don't assume Hasbro will ever be able to give us a better Yak Face in my lifetime, unless of course we get a 6-inch figure, and I'm surely hoping that they do.  Even if you have to play a slight premium, Yak Face is worth it.   It's rare that we get remakes from the original trilogy these days, and this is one of few characters that has not had an update since the 1990s The Power of the Force days.  I don't have anything snarky to say here.  More please, Hasbro.  We missed you.