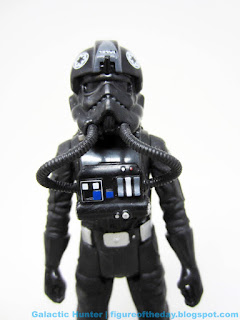 Bio: From gleaming cities to the muddy terrain of Mimban, Imperial forces protect and serve the Empire.  Their versatile training and equipment allows for them to be employed in a wide variety of environments against Rebel forces and others disloyal to the aims of the Empire.   (Taken from the gift set's packaging.) 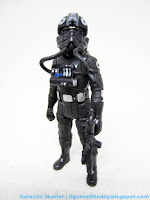 Commentary:  Hasbro has given us a lot of versions of this figure, but I'm surprised to say that this TIE Fighter Pilot is significantly different from previous releases.  The Force Link 2.0 pilot - identical, so far as I can tell, in the Mimban gift set (Target) and the TIE Fighter Force Link 2.0 ship (hard-to-find retail release) - seems to share some elements with previous pilots, but Hasbro  and the Toy Gods made some significant, distinctive changes here.  Given how Hasbro used the same TIE Fighter Pilot mold with minor modifications for over a decade, I'm shocked.

He still has 5 joints, and a lot of the folds and creases are similar to the TIE Striker pack-in pilot [FOTD #2,289].  The texture is surprisingly rich, with a wonderful finish and glossy boots.  The instrument panel on the chest is decorated differently, as is the helmet - complete with aurebesh too small for me to read with the naked eye. 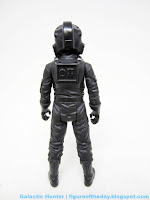 What's particularly amazing is the belt and back of the armor.  The belt has two silver compartments flanking the buckle, as opposed to what we usually get - a silver dot on the figure's right-hand side.  The back has the famous Stormtrooper "OII" markings, instead of the usual smooth armored plate.  The figure has no problems standing, sitting, or piloting a ship with joints that move exactly as needed for such functions, plus there's a swell new-style Imperial Blaster included.  Hasbro probably could have sold army builders these guys by the barrel, had they been sold individually  Maybe we'll see some in an upcoming repack assortment.

You have dozens of these by now, but each one has little changes - and this might be one of the most interesting modernized ones as it actually has some changes made to it.  Get one or more if you can, mostly because it's a different stage of evolution for the Empire's most expendable flight crews.

Force Link 2.0 Notes: "TIE on line, awaiting orders!" "Engaging a perimeter sweep."   "I've got enemy reinforcements on my radar."  "Agh, I'm taking heavy fire here!"  Blaster sounds. The voice is a good voice for toys - I'm assuming it's not from the movies, but Hasbro cast it well.

Collector's Notes: I got my boxed set from Target.   The TIE came from Entertainment Earth.