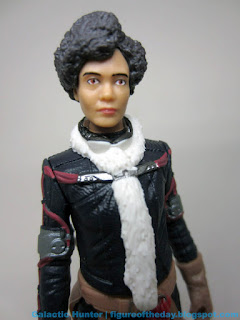 Bio: Val was a female human criminal who worked with fellow outlaw Tobias Beckett during the reign of the Galactic Empire. Val was a no-nonsense and occasionally prickly woman who was a crack shot with a blaster rifle. (Stolen from Wookieepedia.  Packaging has no bio.) 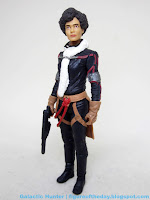 Commentary:  Her appearance was only slightly longer than her name.  Val didn't get to do much prior to her on-screen death (if you didn't see last year's Solo yet, you shouldn't be reading this site), so it's kind of a miracle she got a figure - let alone a post-home-video-release one.  Hasbro has had precious little time to look back, or continue a new movie line beyond a couple of waves.  Seeing Solo get four waves, but an excellent final wave on top of that, was unthinkable.

Val turned out well.  I didn't realize she had glove joints at first, so with 7 points of articulation she's pretty good. The hair is a separately molded piece, and the boots don't swivel - but there's a lot of good sculpted texture here, with a pretty great head sculpt and deco given it's the size of a peanut.  She has a t-crotch and v-arms - an unusual combo, so her legs swing straight forward and her arms veer out a bit.  It's not bad, as it helps with her aim.  The legs are only able to swing forward a little bit, as the belt hangs over the thighs and prevents forward movement beyond about 50 degrees.  Interestingly, it's not the rubbery cords that block the movement but the actual hard plastic belt that's part of the torso.  She has a cable running from her arm to her back, and is generally nicely done with nifty boots and a soft scarf and what I assume are some heating cables. 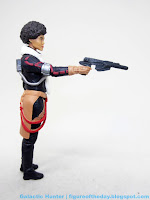 As the only 3 3/4-inch Val, it's nice that Hasbro gave us a good one. I wouldn't be surprised to see a super-articulated Val in the future, but for now? This is it. Go buy it.