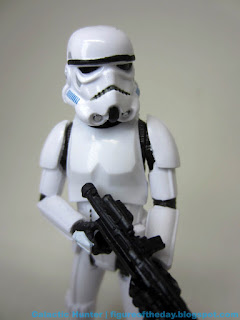 Bio: Stormtroopers are the blaster-carrying soldiers of the Empire whose biggest mission is to destroy the Rebellion and protect the Imperial cause.   (Taken from the packaging.) 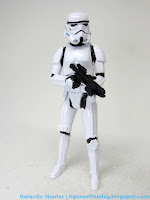 Commentary:  Not too long ago I was saying that I wanted this Stormtrooper to exist - check out Stormtrooper Squad Leader [FOTD #2,533].  It's just what I wanted! But it's a lot more expensive.  Is it worth $10 for a figure without the sound chip and minus an accessory, but with an added comic?

Target's 6-pack was a $44.99 wonder - you got 6 figures which, as of last year, were going for about $7.99 per carded figure.  It was a good deal per-figure, with a couple of nifty exclusives and army builders to make it a worthwhile and exciting purchase.  Hasbro plained-up the Stormtrooper by leaving the Disney-era Empire blaster (note the added greebles) but removed the pauldron, giving you one of the finest, shiniest, best-sculpted Stormtroopers ever produced in this size. That's good!  It has 7 points of articulation. Most of the details are painted in - check out that helmet! The boots lack painted soles, but you get the important landmarks on the helmet and chest.  It's tall, it's skinny.   While there's no holster, you'll probably want to have the trooper aiming the blaster for some sort of diorama display anyway. 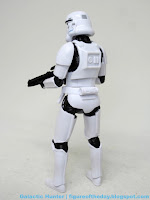 The comic has artwork that's OK with dialogue mostly taken straight from the script.   It has a backdrop of the Death Star.  I'd say it's a waste of pennies, and it adds to the cost while not improving the product in any long-term meaningful way.  Had Hasbro included a product catalog in the back cover I'd be excited.  If it didn't say the Stormtrooper appeared in the sequel series and forgot to mention Solo - which, c'mon, don't make me be a pedant here - the bio inside would be more welcome.  I'm not mad, just disappointed.

I like this figure a lot - if price isn't an issue, get several.  If it is an issue, it's probably worth getting one.   Hasbro's classic sculpts are getting really good these days.