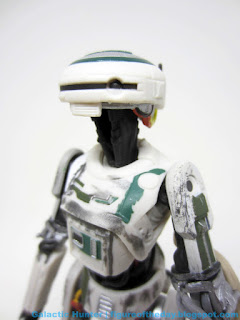 Bio: A "self-made droid" built from astromech and protocol parts, L3-37 is an enlightened navigator who cares deeply about droid rights. (Taken from the figure's packaging.) 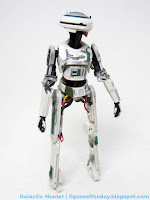 Commentary: I love L3-37.  The design works, the character is fun, and the figure is pretty good - but fragile! This is the second one I've owned. The first had a torn wrist, so be careful if it doesn't turn right away.  The droid is a mishmash of parts you might recognize, or find vaguely familiar.  I love that she's more or less that beige box color of old computers, complete with a head that looks like an old floppy drive.

It's easy to recognize astromech elements on her arms and legs, plus tons of grime and exposed wiring that may remind you of the many Star Tours-specific figures sold at Disney parks over 15 years ago.  She's a gem - she looks like old Star Wars through the prism of modern image compositing.   The mocap robot worked so well on the big screen, and as an action figure I'm amazed she can stand. 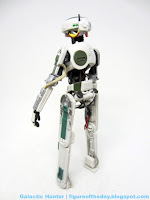 Due to the figure's construction, she only has 19 joints - the only double-joints are at the neck and the wrists, everything else is a single moving part.  The shoulders, necks, and hips are ball-and-socket joints, the wrists bend and swivel, and the rest mostly bend or swivel.   The feet are big enough to be sturdy, and the deco is so intense you'll understand why she doesn't have any gear.  There are grimy stripes and smudges everywhere, giving off the vibe of an old computer that's destined to be cannibalized for parts soon.   There's not much she can do other than be posed and look cool, but in this case it works.  I'm so happy Hasbro held back on releasing the toy until after we all could see the movie, so we knew that there was a fun character here and more than just a cool-looking robot who would need us to write the history.   (IG-88, looking at you.)   Get yourself L3 if you can find one.  Lando will thank you.