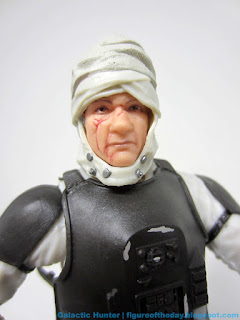 Bio: Crude and slovenly, Dengar was nonetheless an effective bounty hunter.  While some hunters prided themselves on finesse and style, Dengar preferred firepower and destruction.  (Taken from the figure's packaging.) 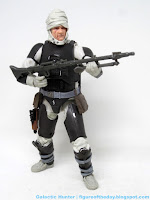 Commentary: The Bounty Hunters are kind of amazing.  The exquisitely designed Boba Fett was joined by characters made of cast-off bits and leftover costumes from Doctor Who with a few new elements, and they became legends.   Dengar was identified as "Zuckass" (with that spelling) in the early comics of the 1980s, before what would eventually be corrected names shook out.  Thanks to confusion in the role-playing game, Kenner figures, and other materials, a lot of fans didn't know who was really who until the 1990s.  Thankfully, as merchandising goes Dengar was always Dengar.

With origins ranging from a hired gun to a swoop racer to a guy with a hot dancer wife.  The new continuity hasn't done much with him yet, but he's still a scarred bodybuilder with bits of Stormtrooper, Sandtrooper, Snowtrooper, and other costumes stapled to the flight suit of superstitious mummys.  The backpack is loaded with detail and pegs in the figure's spine, which is awesome and allows for possible future customization to the variant Return of the Jedi configuration with other armor stapled to his back.  The sculpting is really good, with dingy shoes and wrinkly "cloth" bits.  The head wrapping looks good, which is no small feat - if you get it wrong, it looks even worse.  The wrappings are molded separately from his fleshy face, so customizers might be able to pry it off and augment it with other accessories in the future.  But why would you want to?  This impressively scarred scoundrel has shiny eyes and slightly moist-looking lips.  The printed facial detail continues to look amazing, especially given that it's on a figure that is not exactly extensively documented. 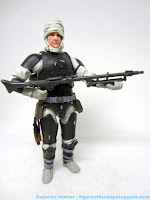 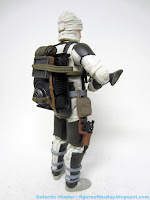 Little details like the holster with a blaster are generally left out, but it's here.  He's loaded with articulation and has no problems holding his weaponry in several poses.   It's remarkable to see Hasbro has engineered an impressive figure with lots of moving parts and armor that doesn't get in the way of you displaying the figure in a variety of interesting ways, while remaining upright with solid feet to keep him standing.

Dengar may not be a robot or a cool alien, but he's a fantastic action figure once again.  If you see it, get it.  If you think it looks good, you're right.  Hasbro did a pretty amazing job replicating arguably the least interesting costume from that scene, so get one and then be angry that it's fantastic.

Email ThisBlogThis!Share to TwitterShare to FacebookShare to Pinterest
Labels: Bounty Hunters, Dengar, The Black Series 6-Inch, The Empire Strikes Back