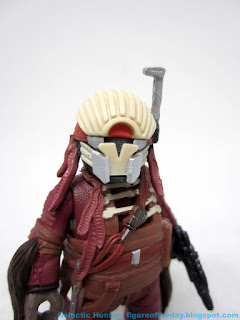 Bio: Enfys Nest's cloud-riding gang of swoop raiders has attracted warriors from scattered worlds and backgrounds, like Weazel, a onetime gambler who now fights for a cause. (Taken from the figure's packaging.) 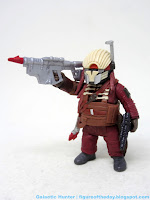 Commentary: Warwick Davis gets around.  Weazel first appeared in The Phantom Menace in 1999, and never got a figure.  They gave everybody a figure in that movie, and the former pod race gambler would go on to fight for a rebel cell.   His new costume is all over the place - a little bit of his hair peeks out form under the helmet.  Elements remind me of the Cloud Car pilot, Boba Fett, and even a little bit looks like Ewok armor of the future.  He has no problems standing, but getting that launcher in his hand is tricky.  I can get him to kind of hold it, but I have a feeling time and gravity may cause  him to drop it.  The pistol fits easily in his hands.

The detail here is good, but the movie costume has a lot more grit to it.  I like the little silver "eyes" on the helmet, but it would have been nice to have a dirt wipe across the helmet too.  The red body suit looks good, with five points of articulation making it a decent little figure with a good center of gravity.  I don't have to fight him to keep standing, and the legs move easily even though he has a big rubbery vest on over his torso.

I like him.  Along with two flavors of Enfys Nest, that's going to about do it for the Cloud Rider gang.  There are lots of cool designs for possible future figures, but the variety since 2010 has been not what it once was.  LEGO gets a lot of fine things, as the figure+playset+vehicle paradigm has shifted to the construction brand.   I'd love to see some more pals for Weazel - or even a prequel version of the figure - but for now?  This is it, and it's good.  If Hasbro is trying to make sure we're left wanting more, the Solo line was certainly expansive enough that I can say I'm not yet ready to be done with it.  Here's hoping we get more figures in the future.

Force Link 2.0 Notes: "You're not going to walk away from this." "I'm going to grind you to dust!" "Well well. Come to pay us a visit?"  "Admit it.   You've met your match!"  "I'm going to blast you!" Blaster shots.  I believe it might be a soundalike, but it's a fun voice and nicely distorted.