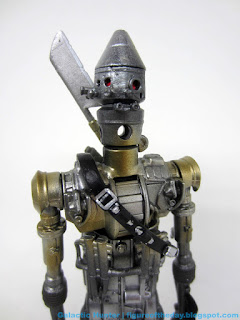 Bio: A battered war droid who has become a bounty hunter, IG-88 answers Darth Vader's call to capture the Millennium Falcon after the Battle of Hoth.  (Taken from the figure's packaging.) 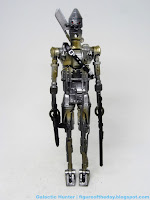 Commentary: I don't believe I got to review IG-88 on his debut 6-inch release because mine had uneven legs, and I hated it.   I couldn't straighten them out or get him to stand unassisted so I thought he was awful.  The figure could probably benefit from being a smidgen taller, but for what it is, it's pretty good this time out.  On my sample, both legs are even and he had no problems standing without help.  There are rubbery joints over the elbows which some reported crumbling on the last release (mine have not as of yet), and the knees have double joints.  They're stiff, though, so at least only one set of mine are moving easily.  The ankles title, the thighs swivel, and there are lateral joints on the shoulders as well as swivels.  The original sculpt is pretty nicely jointed, and now that he can stand I'd go as far as to say it's good. 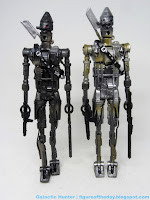 Weapon interaction has been historically challenging for IG-88 figures, and this one manages to cheat in a lovely way.  Each blaster has a tiny hole in it, and each arm has a tiny peg on it.  You plug the guns into the hands, so it looks like he's holding them - it's perfect.  IG-88 also has a holster on the back and a place to store the knife whicih, to this day, I have not seen in the movie when I watched it.

Deco is decidedly different, which I can appreciate - but the paint job looked better before when he was a bit more rusty.  The grime is a bit more golden this time, which isn't necessarily bad - just different.  The head has brightly-colored orange dots on it that seem to be drowned out by the shadows, so in that respect it could be improved.  The articulation is decent given how spindly he is, but I want to draw attention to the ab-crunch joint in the chest.  There's a wheel and the figure can tilt forward on it, which I just love.  It's the kind of clever thinking I like to see in a line like this, where things are largely predictable within the context of what a humanoid figure can and will do. 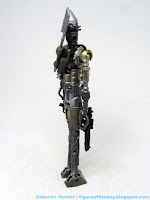 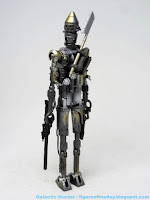 If you missed IG-88 before, this is a better one.  You might want to paint some changes, but the base figure is definitely better than the one I got a few years ago.   He can stand, and he can hold his weapons - that's mostly what I need these days, so thanks to Hasbro for fixing the legs.