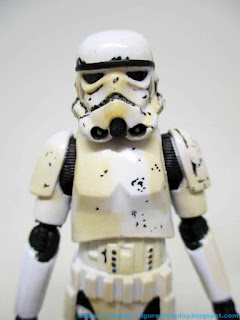 Bio: Stormtroopers, nicknamed "bucketheads" and—after the Battle of Endor—Remnant Stormtroopers, were the elite shock troops of the Galactic Empire. As members of the Stormtrooper Corps, an independent branch that operated under the Imperial Army, they served as frontline assault forces and formed the backbone of the Imperial Military. (Stolen from Wookieepedia. Packaging has no bio.) 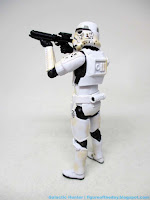 Commentary: Hasbro knows fans want more troopers, so this Remnant Stormtrooper redeco of the 2019 Imperial Stormtrooper [FOTD #2,598] is the kind of low-hanging fruit I can support.   Pre-scuffed and semi-yellowed, the Stormtrooper comes from a far-flung world where cleaning supplies and paper towels no longer exist.   (Not that we can relate.)   I would assume the armor can be at least partially wiped down, but maybe it can't.  At least, it wasn't. 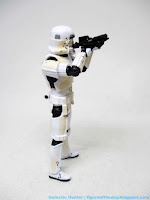 The figure is the same gem of a trooper you wanted more of from last year - and I hope Hasbro keeps both versions in circulation.   It has the redesigned blaster from the Disney-era movies as well as a design that seems to be of the modern era.  If I am missing key landmarks, that's what updates and the comment section are for.      Taking a cue from old-school battle damage, the back of the figure is basically clean while the front has smudges, chips, and aging painted on.   I'd love to see even more in a future rerelease, but this looks great and it's the perfect figure to populate your Imperial Troop Transporter vehicles.   Sadly, it doesn't have rocker ankles - but other than that it's about as good as a figure of this scale can be for the price. 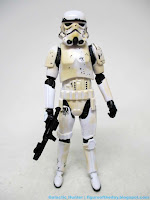 It's a gem - fans can add (and presumably remove) battle damage deco with paint removers of various kinds, the articulation is as good as it gets for this trooper so far, and you're going to wish you had dozens of these.  Hopefully Hasbro will keep making more!  If you've got a big enough Stormtrooper army, you don't need these, but I bet any dioramas or ships you may  have would love to have these fleshing them out.  This figure comes strongly recommended at regular retail price.