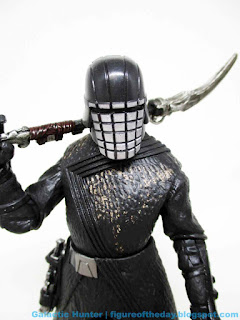 Bio: An enclave of masked warriors wielding distinct weapons for ranged and close quarters combat, the Knights of Ren are elite, fearsome enforces of Kylo Ren. (Taken from the figure's packaging.) 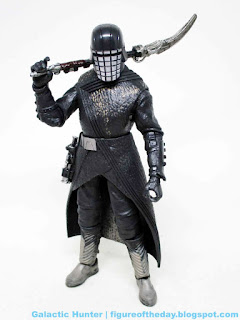 Commentary: One of my gripes about reviewing Star Wars figures is a lack of novelty.  Play features are rare, as are new innovations.  Hasbro pulled some surprises out of their sleeves with the first 6-inch Knight of Ren figure, which is also the only 6-inch one, known to reference books as Vicrul.  I hope they make the whole gang, and so do you - because they put some neat new features in to this one along with better-than-average articulation tucked inside his folds and wrinkles.

Part of an elite tribe of Snake Eyes, Batman, and Darth Vader cosplayers, Vicrul seems to be a product of his culture.   You can see decades of Star Wars design here, like Supreme Cancellor Palpatine's weird leathery oRevenge of the Sith, a helmet that seems like a pastiche of First Order and Imperial helmets, dusty boots, and a coat that gives you all the black leather you could want.  With no real eyes to speak of, it's the epitome of new trilogy designs.  Familiar, but different.
utfit from 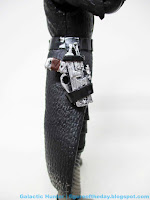 The figure decides to amp things up a bit by changing up how it's constructed.  You get the rocker ankles you always get, but you also get those nifty new shoulders that can swivel forwards and backwards - but they're not visible!   And why not?  The torso is covered in a rubbery shirt, which hides a lot of the joints in that general area.  Clever!  At least 27 joints are present, including one of the best double-jointed necks we've yet got in this scale. It's not just a barbell connecting the chest to the skull - there's a full neck with a surprisingly large range of motion in there. 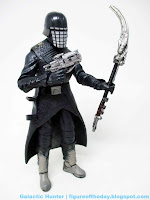 I love the fact that the helmet has a silvery - but not scuffed - look, with the back even having some subtle grey stripes that you probably would never miss had they left it unpainted.   The blaster and club easily fit in the hands, but I should point out that it does have some minorest of minor quibbles with accessories.   The right hand isn't particularly tight for the club, but it can easily assume the publicity pose you've seen in the books.  The blaster fits in the hand quite nicely, but it's a little tough to get it in the holster - you have to stretch a strap to fit, which will undoubtedly end in heartbreak in the distant future when the plastic snaps some day.  I would recommend putting it in there now, or leaving it out, and making peace with that decision. (Or buy two!)

Hasbro has given us a lot of good figures lately, but the improved shoulder and neck joints make me very happy here.   I'd love to see the rest of the gang!  It's a pity we got one in 3 3/4-inch, one in 6-inch, and they can't hang out together.   C'mon Hasbro, pick a size. We're at war here.  Get this figure if you can find it.

Email ThisBlogThis!Share to TwitterShare to FacebookShare to Pinterest
Labels: Knights of Ren, The Black Series 6-Inch, The First Order

Great looking figure. I like all the Knights of Wren and definitely hope we see them all in 6 inch form. Great post.