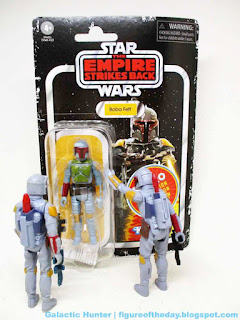 Bio: Trained in combat and martial skills from a young age, Boba Fett became a legend over the course of his career which included contracts for the Empire and the criminal underworld.  (Stolen from Wookieepedia.  Packaging has no bio.) 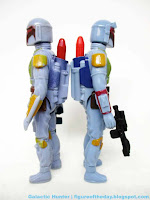 Commentary: Happy 40th Birthday The Empire Strikes Back!   The original Kenner Boba Fett is a big deal.  It's based on a suit not used in the movies, the figure's colors are - like a lot of the Class of 1979 - a little off, and of course there's the infamy of the firing rocket that saw release as a mail-in Boba Fett [FOTD #1,429] in 2010.   Each figure has pros and cons, plus there are some running changes and tweaks in the run of millions of original 1970s and 1980s Bobas Fett. 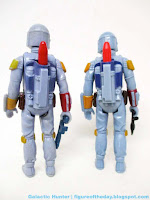 I am unsure exactly where the sculpt comes from.   I compared it to Gentle Giant's 12-inch Boba Fett, Kenner's 1979 Boba Fett, and Hasbro's 2010 Rocket-Firing Mail-In Boba Fett.  Each has distinctive elements and deco applications that are a little different, with things like the figure's helmet, rocket, and red right gauntlet being good "tells."   The 2020 figure does have the distinctive down-the-helmet seam in the front, but it's thinner and more restrained than the other figures that also have it.  The red gauntlet has two little blue tubules on the other releases, but they're completely missing on the 2020 figure.  The 2020 figure's proportions are also a little different - it seems the torso is a little longer than the 1989 original, but stands a hair shorter.  Strange.  The rocket's sculpted grooves are also a little different, with some fans reporting theirs isn't glued in for the 2020 release.  The red rocket is also incredibly bright this time. 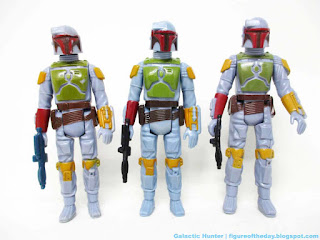 Boba's colors are exceptionally different for 2020.  (2020 is in the center, 1979 on the left, 2010 on the right.)  The pale blue/grey plastic is much more of a saturated blue, and I'd say the same for all the colors - the reds and yellows are richer, the browns are darker, and even the green is a big greener on the chest armor.   The blaster is black and a tiny bit smaller than the 1979 original (and much larger than the 2010 rocket-firing edition.) A lot of details and shapes on the blaster are a little different, like the ammo clip being less squared-off.   Overall it seems to steer closer to the 1979 figure's sculpt than the 2010 (if memory serves) totally new sculpt based on the original Kenner figure. 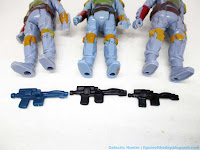 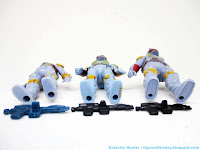 The 2020 figure stands well - the 2010 tends to fall over backward, and the 1979 figure also stands well.  The 2020 figure also seems to grip the blaster best, and has incredibly tight joints.   He's a bit smoother, a bit shinier, and for anyone that has handled, dealed in, or played with the original toys you can tell there's something a bit off with the 2020 version.  And there are new date stamps on the legs!  To the average fan, I doubt they'll notice it's different - but for $10, it's good enough and significantly cheaper than getting real, actual Kenner toys that are 40 or so  years old.

If you're a completist, just get whatever.  I would recommend you be happy with the previous releases you already have, but if you don't have any of those $10 is a deal for this figure.  It's different enough to be interesting, and a nice thing to have.  But it's not the best. 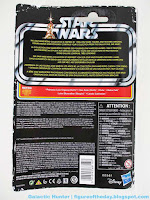 Packaging Notes: The packaging is bad.  Lucasfilm and Hasbro went out of their way to make sure you couldn't possibly mistake it for the original - there's a distinctive fake wear pattern.  The coffin bubble now is significantly enlarged and has a tray (and a paper disclaimer) inside.  There's a "4+" sticker on it, and a WARNING box.   And the big RETRO COLLECTION sticker in several languages, which, let's be frank, that multi-language look is garbage on retro figures unless you're making Tri-Logo packaging.  The back is much worse. There are no co-sells pictured, but there's a tiny red box with the characters named.  There are tons of disclaimers and logos you can't avoid - but the yellow text explaining this collection is a total waste of space that could have gone to photography or an illustration.   Don't get me wrong, it's good enough for fans who never had a crack at the originals - but of all The Vintage Collection-esque packaging over the years, I think I can safely say this is the ugliest.   They kept the 1978-1979 Luke and Leia art on the back with the original Star Wars logo too, not even bothering to make something more appropriate to the sequel.   There's no reason for something like this to be or look rushed, and I hope we see some more love put into whatever we get for Return of the Jedi someday.

Sorry last week was a rough one for you!