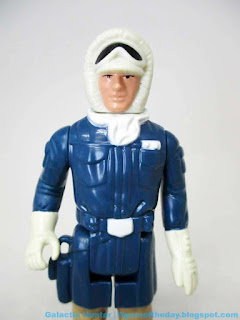 Bio: After the Battle of Hoth, Han Solo sought refuge with Organa—with whom he had fallen in love—Chewbacca, and C-3PO on Cloud City, which was operated by his old friend Lando Calrissian. (Stolen from Wookieepedia.  Packaging has no bio.) 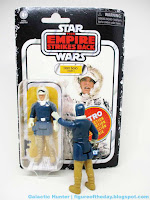 Commentary: Hasbro's Han Solo (Hoth) is a lot closer to Kenner's old figure, but it's clearly a copy of a copy.  The ammo clip is rounded off on the blaster, the whites are whiter, the tan is lighter, the blue is a little less rich, and all the sculpted details are quite soft.   You probably won't notice any of these things at first glance, because the figure certainly looks like how you remember him enough that you likely would never question that a single detail is off.

Kenner's original design still looks good - Han's jacket is blue, the holster has the sculpted loop at the top, and everything is where it should be.  It just all looks a bit different.  Wrinkles aren't quite right, but they're present.  The grooves and ridges on the original toy are a lot more pronounced, but one detail Hasbro tends to miss is the general wonkiness of the originals.  In Han's case, the gloves and boots are all painted cleanly while Kenner's originals frequently have wrists unpainted (or overpainted) and pants that overspray on the underside of the figure's legs aren't entirely uncommon.  The flesh tone is a bit better on the new release too, so from a distance I would go as far as to say the 2020 rerelease may be the one you want.  Particularly if your eyes aren't perfect. 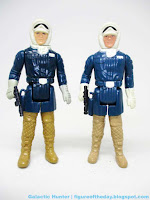 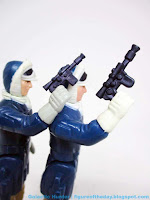 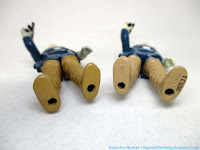 Much like the figure, the blaster seems to be a copy of a copy - some of the details around the scope don't look quite right.  Everything is more or less close to where it should be, but you can tell they made it a bit different either on purpose or because it was overlooked.   Han has zero problems holding his blaster, and the joints are very tight.  I'd say the hip joints seem exceedingly tight, but hey, we'll see how it holds up over time.  May his crotch not explode.  Get one if you can find him!  And a split belly Tauntaun from 1982. 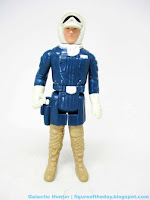 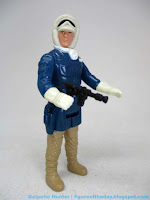 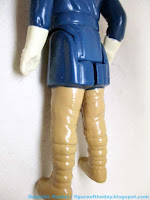 Email ThisBlogThis!Share to TwitterShare to FacebookShare to Pinterest
Labels: Exclusive, Han Solo, Rebellion, The Empire Strikes Back, The Retro Collection

How well does the new blaster fit in the holster?

Same as the old one - which is to say, it doesn't. Someone will correct me if I'm wrong but if I remember correctly, Hasbro and Kenner didn't have working holsters for 3 3/4-inch figures until about 1999.

The magazine fits into the loop similarly to what some of us used to do with the vintage figure.

Really sorry to hear of your loss Adam. Hope you are doing as best you can.