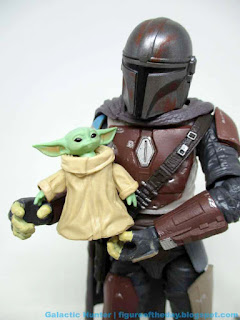 Bio: A male Force-sensitive Mandalorian foundling that belonged to the same species as Jedi Grand Master Yoda and Jedi Master Yaddle. (Stolen from Wookieepedia - box has no bio, is bite-sized.) 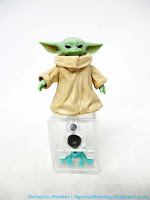 Commentary: Let's just get this out of the way - The Child is not worth the ten bucks, but you're going to buy it anyway.  It's not disappointing, there's just not much there and there are clear limitations due to the size and costume design. 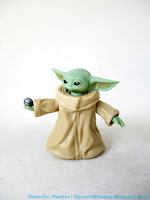 At 1.2 inches tall, this is a small figure.  Roughly the same size as the Porgs, smaller than a M.U.S.C.L.E. man, and even tinier than Hasbro's own blind-bagged figures that usually sell for $3, this is a situation - like the Vintage line - where you're probably being charged a smidgen more because it'll sell.

If you put this exact figure in a 3 3/4-inch package aimed at kids I'm sure it would cost less, but it's not, so it isn't.   Costs aside, Hasbro did a pretty good job with it - ball-jointed shoulders, swivel wrists, ball-jointed feet, and a ball-jointed neck add up to 7 points of articulation. 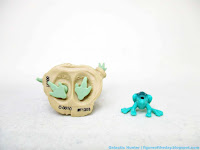 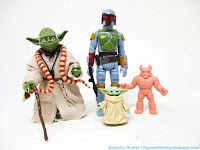 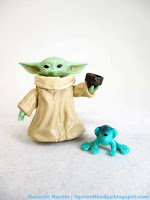 The articulation is not all useful. The neck joint is great - the ball goes into the chest, giving him a greater range of motion which adds to the figure's personality.  The wrists swivel, which is handy when trying to get him to hold a shifter knob.

On the other hand, the shoulders can only go up and out - there's no way to get both hands on the bone broth bowl.  The swivel feet just make it harder to make him level, having no articulation down there would certainly have made for a better product.   This isn't a great figure for interacting with accessories, but given Hasbro (and friends) had a couple of weeks to design it and managed to deliver the secret character to fans in under 6 months, it's amazing.   I'd go as far as to say they should've pared down the features to get it here faster and cheaper, but that's me.   At the very least, he can stand and look cute. That's mostly why you're buying this. 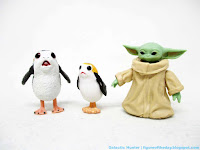 What's funny is I almost wish Hasbro went in the other direction - how could this be a $20 figure?  Maybe include a floating carriage, multiple Babies Yoda in various poses, perhaps with no articulation to get around the bulky outfit's restrictions, and any other accessory.  Or, make a new assortment of $25-$30 The Black Series figures, each of which come with a uniquely posed non-articulated The Child.   Or just bundle him as an accessory with a dud figure - which I think they should still try doing, as demand for this little guy might not be met for a while. 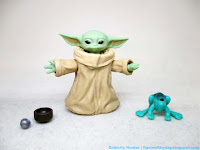 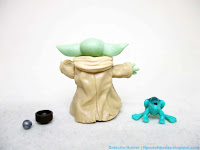 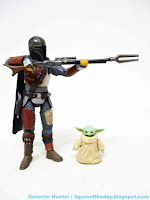 With Funko's Pop! Vinyl figures at $10-$11, there's just no way I can pretend that this is a good deal.  It's not.  Hasbro's "Baby Bounties" are about $7 each, and larger.   But if you want a little tiny The Child, a fan-made 3-d printed one would cost about the same and probably not be of a similar quality.  Mattel gave us Jurassic World humans with more articulation and more gear at a lower price, and Hasbro made surprisingly excellent kid-focused 6-inch Marvel figures with more articulation for $9.99.  But, as I said, you're going to buy it anyway.  That's the power of good storytelling and the best toy license in the galaxy.

Email ThisBlogThis!Share to TwitterShare to FacebookShare to Pinterest
Labels: The Black Series 6-Inch, The Child, The Mandalorian (Streaming Series)