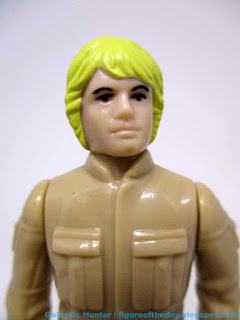 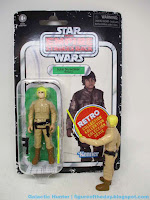 Commentary: Hasbro's Luke Skywalker (Bespin) is a good reissue.   It's a bit different, but aside from one strange change largely is as good as your memory of the original.  The joints aren't nearly as stiff, the lightsaber is nice and bright, the pistol is sculpted a bit differently, but everything else is pretty good.  I even like the head more - it's not as round and has a slightly different facial expression.   The brown Bespin fatigues are a little browner, the boots are a little less saturated, and the lightsaber on his left leg actually adds some detail.  There's an extra protrusion on it.   I kind of like this approach more - augmenting the original figure, rather than an identical (or weirdly changed) rerelease.  Hasbro could've also colored the belt buckle for all I care, just to make it more glaringly obvious that This Is New.

Everything else is where it should be - the wrinkles are all there.  There's an extra line in the flap on a pouch over Luke's butt, which is new, but by and large it's all here and different enough so that you can tell this is not the original - even if you missed the new copyrights on the back of the leg.  Along with the very good  Hoth Han, this is a nice rerelease - it's close enough to the original that you young people will never know the difference. 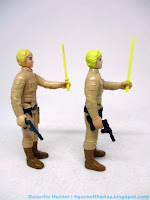 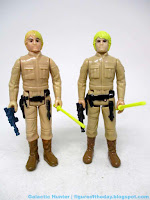 What's weird - and I mean "what the heck?" weird - is there's a loop painted in next to his belt buckle for no reason. The original toy was filled in black, this one is painted in flesh - like some weird belly button over his junk. Why? I don't know.  It's bizarre.  Had they left this paint application off, they could save a few thousand bucks and the run would look better.  This is the only real blemish on an otherwise fantastic reissue.

Nice looking figure. I haven't seen these in hand but if given the chance I can see picking up one in the line. Good post and review.

I think slight but easily noticeable details like the dot you mentioned are put there so that it's easy to distinguish an original 1980 figure from a 2020 retro version.