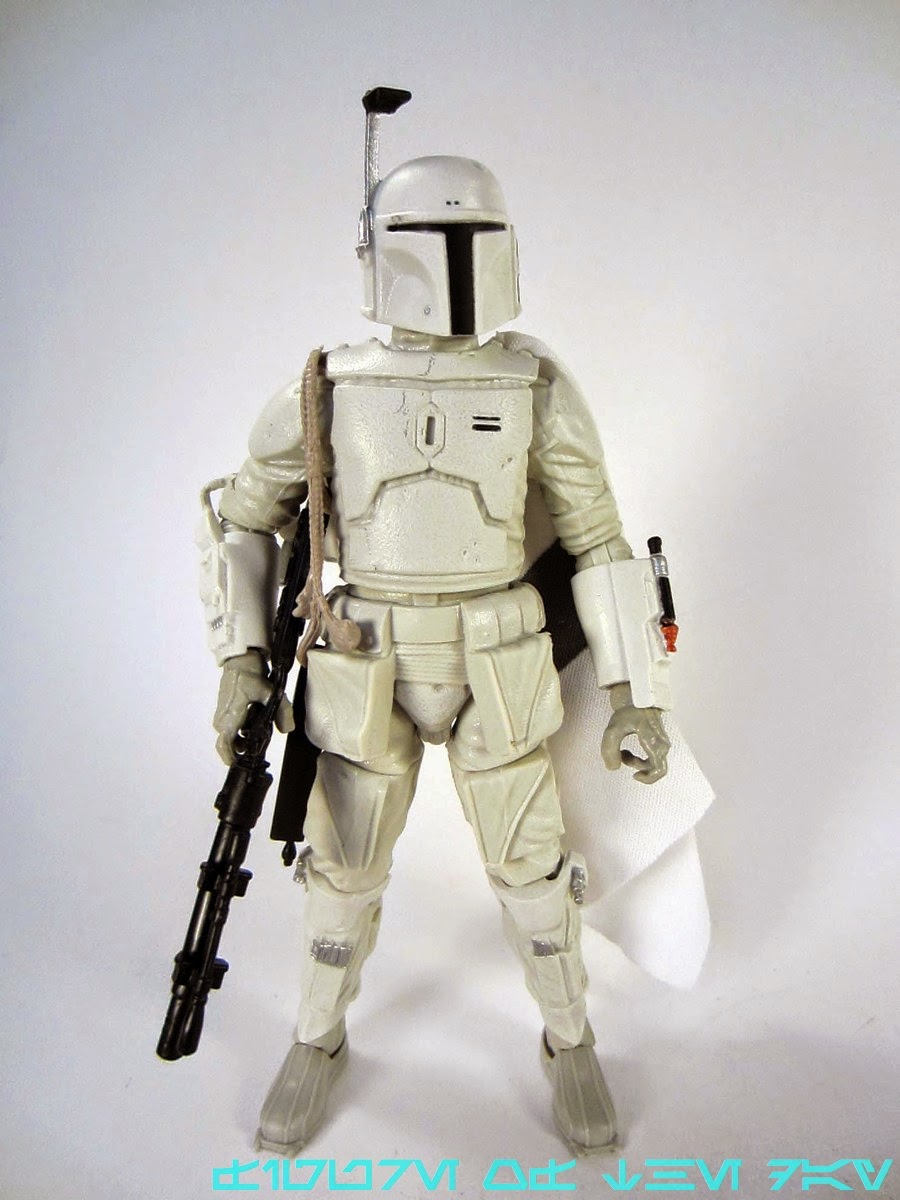 Bio: Before he put on the familiar Mandalorian armor from the Star Wars saga, this notorious  bounty hunter was initially envisioned as a "super trooper" in all-white armor.  This special figure captures the beginning of a character that has become a legend who is both respected and feared across the galaxy... Boba Fett.  (Taken from the figure's packaging.)

Commentary: It's a white repaint - but a good one. Boba Fett has a suit of armor that lends itself to repainting, even if the sculpt isn't a perfect match.  The suits of armor are many, my most-requested variant is the one that inspired Kenner's 12-inch and 3 3/4-inch version from the 1970s with the yellow gauntlet on the left arm.  Alas, we're still waiting.  That armor had a "grappling hook" rocket originally, as did this white concept suit - but the figure just decorated the existing tooling because Hasbro wanted to get another solid grab out of the mold, and I must admit it's a nice one  Sure, the helmet dent looks odd here but it's still a neat figure unto itself.  If Hasbro had made up this concept, rather than it being something worn in behind-the-scenes screen tests nearly 35 years ago, I'd still say it's a worthwhile purchase. 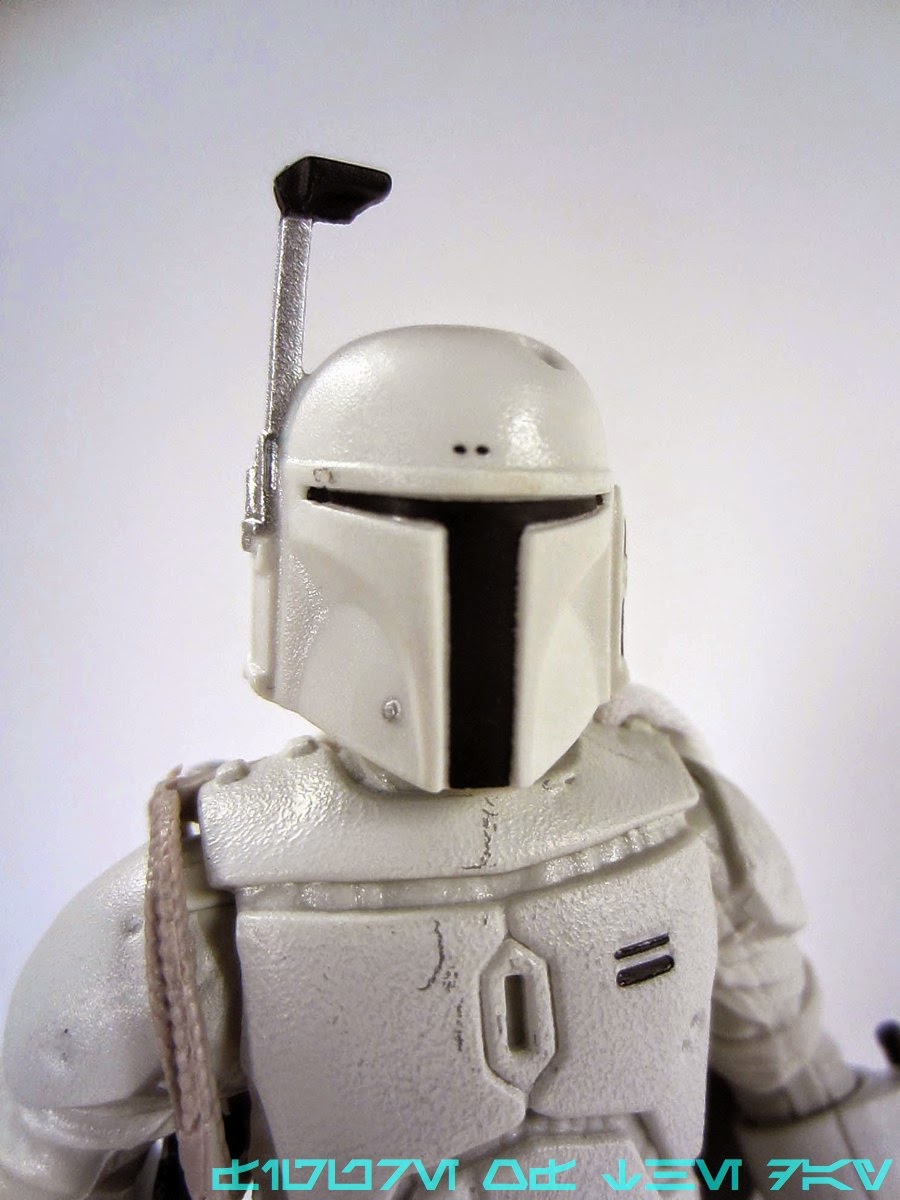 If you bought the 2013 SDCC Boba Fett, or the basic boxed Boba Fett, it's the same basic figure.  You get a holster with a blaster pistol, bend-and-swivel wrists, rocker ankles, double-jointed knees, and a rifle.  You don't get a removable rocket or articulated rangefinder, nor is the cape a Star Wars beach towel.  What you do get is a figure molded in a nice white plastic with silver, black, and grey highlights (highlights?) that really make this look like a quality product - and for $20, you could do a lot worse.   The big downer is that it sold at Walgreens.  If you don't live in the USA, Walgreens has more locations than almost any other nationwide chain except maybe McDonald's or 7-11.

There are over 8,000 US locations - I easily hit up 16 locations in my town, and I could have kept going without going all that far out of my way to a dozen more. Thank goodness I didn't have to, unlike Target or Toys R Us there are fewer hot moms shopping there and more point-of-sale displays that have electronic sneezing sounds and disgusting shots of people blowing their noses on window signs.   The feeling you get after seeing about 20 Walgreens in 2 days is that this is a store people have to shop at, while the others are places you may actually elect to go.  And I don't mean for just toys - if you're at a Walgreens at 2 AM, someone, somewhere, should be expressing their sympathies to you.  Perhaps your wife just vomited on you.  Perhaps you just vomited on your wife.  The point is this - don't get married.  No, wait - we're here to talk about toys. 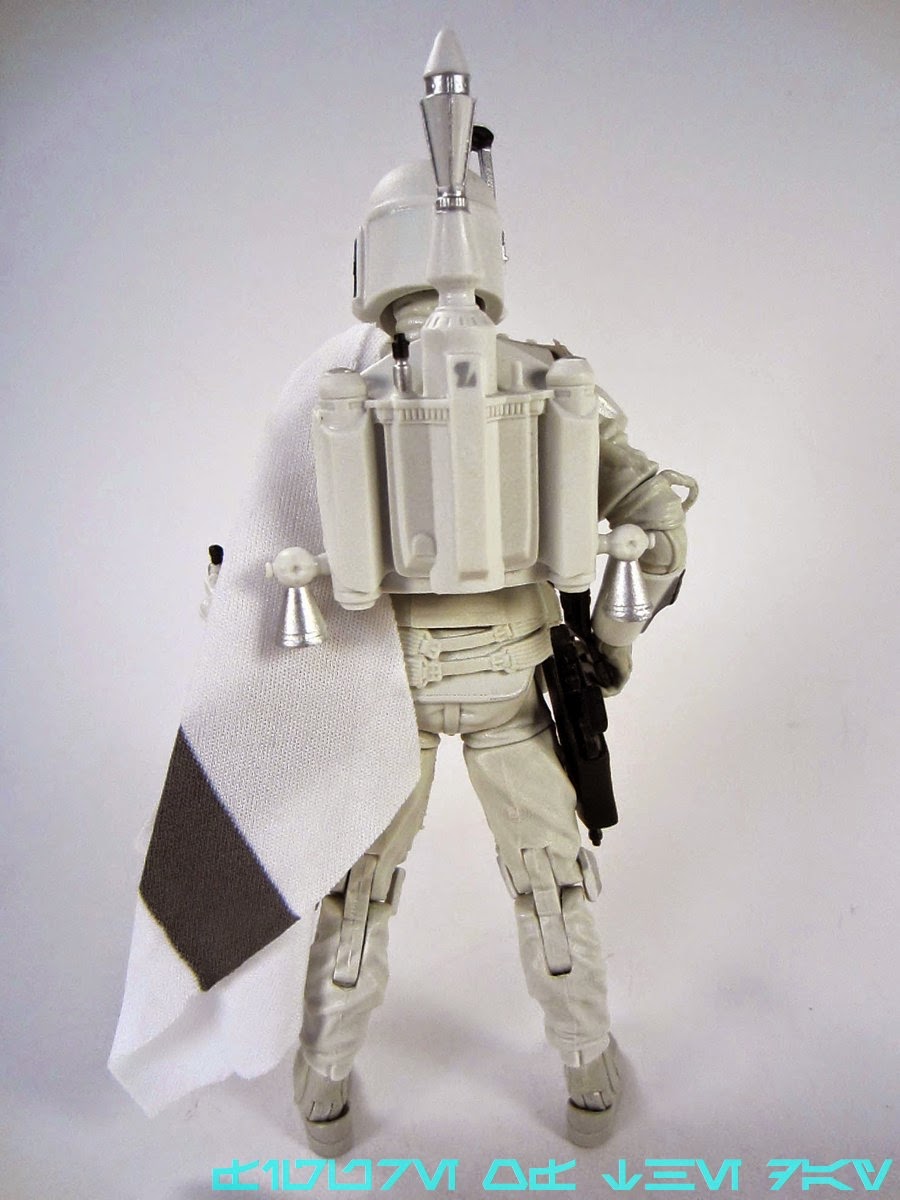 The figure itself does a decent job copying the deco on that first Boba Fett armor.  There are no decals, no battle-damage scoring.   Silver wear and tear is absent, but you do get some wonderful markings on the jet pack make this a close match, but a perfect one would require new sculpting. After all, that armor didn't have a holster - the figure does, and I'd rather have it than not have it. My guess is that this figure exists because Walgreens, like Home Depot, Costco, and 7-11, are wonderful potential customers for any manufacturer.  With 8,000 locations at 1-2 cases of figures per store, you're making some serious sales - plus the high foot traffic of moms with sick kids, people needing meds, or drunk people buying ice cream at 4 in the morning are all good candidates to join our plastic acquisition cult.   Giving the consumer greater access to toys is a good thing, especially when you consider the reduction in customers from Kay-Bee, Kmart, Sears, JC Penny, Montgomery Ward, ToyCo, and I could go on.  Hasbro needs to find new places to sell toys as the number of adult collectors who will go on crazy quests just to get a dumb figure aren't increasing in the post-ToyFare marketplace.  We're here to buy what we want and call it a day - reading up on other lines or expanding our horizons is a rarity in the information age. 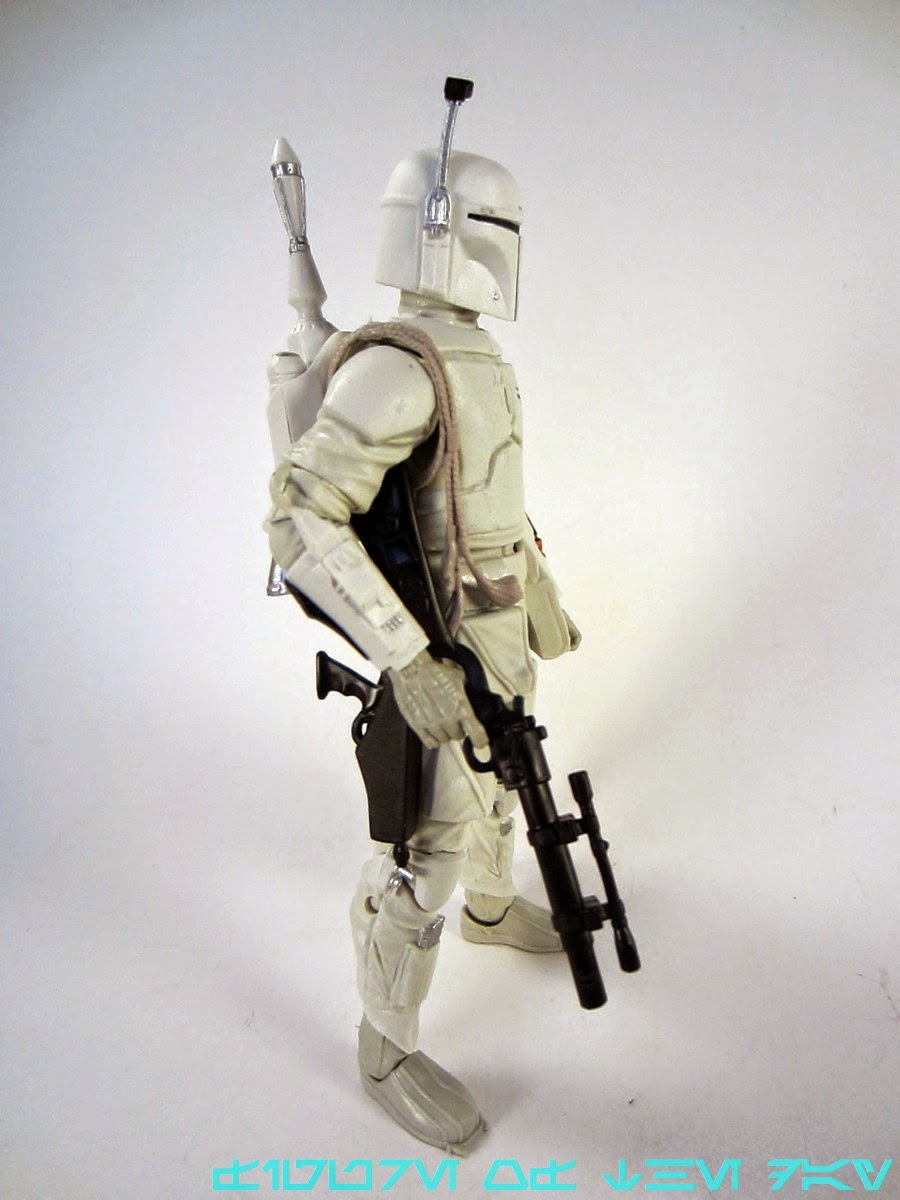 I like this figure a lot more than the 3 3/4-inch mail-in Vintage version, but not as much as the 3 3/4-inch McQuarrie Concept version which had more cool parts and an alternate head sculpt.   Heck, if Hasbro did McQuarrie Concept Black Series I'd be doing cartwheels - had I the upper-body strength to do so.  Instead, I'll just enjoy this nifty, low-impact and non-essential repaint as a quirky, fun addition to my stash - and it may be my favorite figure in the line so far as it doesn't have any baggage.  It's just cool and Star Wars-y.

Collector's Notes: While solid-packed cases may ship to Walgreens stores like we saw with the Marvel Legends Agent Venom figure, these have not yet been spotted.  Instead they're shipping alongside Darth Vader, a Sandtrooper, Jedi Luke, and Chewbacca - surely, a good mix.  Walgreens has been ramping up its toy section with lower prices and more Funko and McFarlane product, clearly gearing for that impulse adult buy.  It would stand to reason more exclusives may hit in the future, but hitting my local stores yielded dozens of unsold Funko Legacy Collection Game of Thrones figures and 2-8 Marvel Legends Agent Venom figures at the majority of locations last week.  For this reason - and the sheer abundance of Walgreens locations - I would strongly urge you to track one down yourself and not pay premium prices on the secondary market.

Still waiting for my pre-order to ship...

I like this figure even more than I thought I would. I haven't jumped into the 6" line with both feet, as I'm more of a 3.75 guy, but this one is just cool. I dig it!