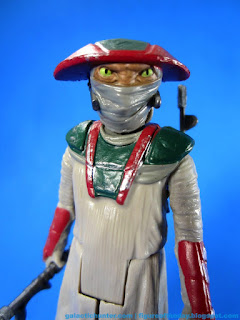 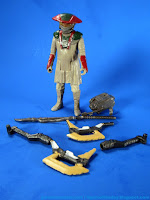 Commentary:  Good or bad, Constable Zuvio is the guy with a gun.  Just because you keep order doesn't necessarily mean you're on the side of our heroes, and really all we know about this guy is his toy.  There have been few to no rumors about the character, so if this was a deleted scene toy or a background alien, you'd never know.  You just got snookered into buying a figure of something you don't know a thing about, or maybe you got something really awesome early and you'll be happy you bought it come December 18.   (Interestingly, the same date as the soundtrack release.  Perhaps they're hiding another "Death of Qui-Gon.") 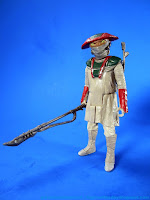 The figure is seemingly fine.   He's shorter than most, but not as short as a Yoda or an R2-D2.  His wide hat made people think he's the same species as Embo, why I don't know.  It's a swell hat on an alien head, which itself is on a body that would be right at home in Jabba's Palace or the Cantina.  It's a boring brown tunic with brown pants and brown boots, plus a little red and green armor for color.  What is particularly interesting about Zuvio is his armor - the red and green parts have silver brushing on them, giving him an element of "damage."   It's not obvious in the dark but it's there - it's nice.   The face is mostly a red/pink color with yellow eyes and a strangely-shaped head. 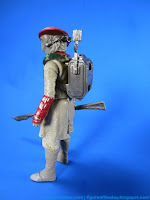 When looking at the package art I can't help but wonder if this is a CG character, because it doesn't look like a rubber mask.  Perhaps the figure is based on concept art - I suppose it's possible nobody really knows.   I think it's a little drab for a significant character, but as a background guy it would be fantastic.  His backpack pops off, and he can kind of hold his rifle in one hand.  He's not much of an aimer, and this would go down as a good argument for more articulation.  With more info and less secrecy, Hasbro can make a figure posed to fit his or her personality.  Here, it's just a guess - so removing the idea of a pose can do wonders in adding personality as the customer.   It's the difference between Darth Vader holding out his hand to Force-choke someone and a hand just down by his side.  Also, it's worth noting that the head may pop off as you turn it - it doesn't hug the neck ball joint as well as it should.  So do be careful. 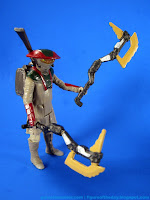 The "Combine!" accessory is four pieces.  You get two axes that can separate, or articulate, depending on how you use them.  They have white and tan highlights and, in and of themselves, are junk drawer fodder.  They're not bad, but they're kind of awkward.  The real fun comes in combining them - this is another good combo platter.  The shield from the Flametrooper, the backpack from Finn, and these bladed weapons make a small crab tank robot with guns and axe claws.  It's awesome.  It has a red eye to see, and generally seems fantastic - I've got one on my desk and this seems like one of the better realizations of what this line aspired to offer.  Since we're pre-movie I assume people may be more receptive to made-up weirdness, and this fits the bill.  It's a fun weird little droid to attack your figures and if it had spring-loaded arms or working wheels it would be legitimately stupendous.  It might end up in a drawer some day as it really doesn't fit in with the line look or these toys, but I think I'd have fun playing with it were I younger.  As it is, I have it menacing other toys on my desk.

There's nothing  wrong with Constable Zuvio.  It's a perfectly decent figure.  It meets all the criteria for a good figure, but like the Resistance Trooper it's hard to get really excited for this one because I don't know anything about it.  This is really a complaint about the whole line - we had a pretty good idea who the Phantom Menace players were thanks to interviews and releases, but when I look at the first twelve ten 3 3/4-inch figures I realize that the only things I could probably tell you next to nothing about any of them.  Those of you reading this years in the future - both of you - may get a kick out of our obliviousness toward the character, but what's also worth mentioning is that the toy was the first anybody knew about the character.  (Or prop.)   Numerous news and gossip sites posted articles explaining who the character was, none of which went into more detail than his bio - but spent pages doing it.   He's a dude in a hat, and were it not for the hat you would probably assume this was a concept costume for Shmi Skywalker.   It's nice.   It's not terrible.  It's also not remarkable.   I'm liking it.