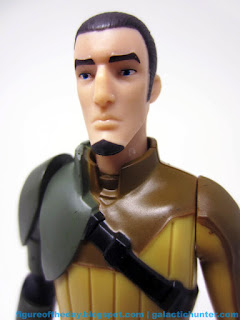 Bio: A Jedi Padawan who survived the destruction of the Jedi Order, Kanan kept his past a secret until he joined a group of rebels dedicated to resisting the Empire. (Taken from the figure's packaging.) 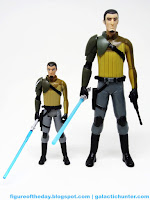 Commentary:  I was surprised to see Kanan Jarrus - I stumbled on this 6-inch animated-style 4-jointed figure when dumping my old bicycle at Goodwill, because it's next to a Family Dollar.  The sculpt seems to be the same basic design we saw for the 3 3/4-inch figure, the 12-inch figure, and the 20-inch figure that Jakks put out.   He's in a proper legit "vintage" pose with straight limbs and decent sculpting, mostly with smooth lines that look like it came right out of the Disney animation CAD files. 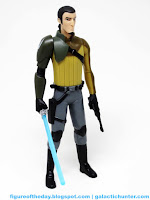 The figure itself is largely the same as those other releases, but it's notable in how his articulation and accessories were executed.  For starters, he has an actual blaster for his left hand - it doesn't fit in the holster, but he can grab it and aim it.  I love it.    The lightsaber hilt is molded to the hand, but the blade is removable.   It's worth noting Vader's blade is stuck to the hilt, but Luke's is very much the same as Kanan's.

While Kanan is scaled to fit in with your 6-inch The Black Series figures - and a "realistic" Kanan will be warming shelves and clogging stores in a few months - the articulation is completely different.  Kanan's neck, shoulders, and waist rotate... and that's it.  This figure looks good and is the perfect size for a desk or a shelf, but as a toy there's not much to it.  It's even simpler than the current range of Galactic Heroes, so this is a figure you'll probably buy for his own aesthetics or just to steal his blaster for your other similarly sized action figures. 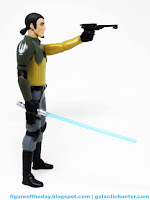 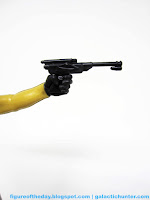 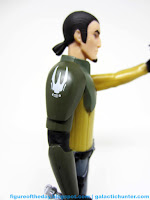 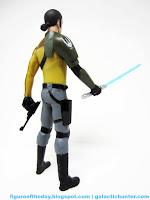 In my old age I'm increasingly interested in some of the weirder or more different stuff.  This is it.   It's a larger, but not too large, Kanan.  It will never interact with a vehicle.  It's a safe bet we won't see too many more figures in this scale - but maybe I'm wrong, we've got 8 so far.  The joints work well, he stands up well, and traditional collectors are too full of themselves to look at these.  The line is being sold at stores that cater to down market families and kids who can't go to the big box stores we enjoy.  Odds are a lot of people won't ever know these exist, and the kids will destroy them all, and people won't even know that they're scarce - they will go down being ignored, or a thing kids remember having and then get confused when they see figures in 3 other sizes that look almost exactly the same when the college nostalgia bug hits.   My Black Series guys are nice, but this is sturdy - so after opening Kanan (and before opening the other two I found) I went onto eBay and ordered the first wave from Mexico.   I bet it'll be worth it. 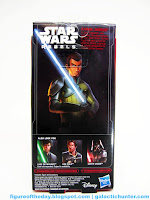 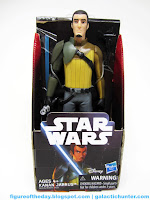 Collector's Notes: I got mine from Family Dollar.  Wave 1 was international only so far (Australia, Mexico) and Wave 2 is in the USA so far.   Wave 1 came in window boxes like the 12-inch figures, Wave 2 came in open "tray" boxes.   They're basically scale with 6-inch The Black Series.   I should note that Kanan, Vader, and Luke have all-English packaging - no French, no Spanish, and that's downright unusual these days.

I have the Kanan Jarrus and the Han Solo figure from Family Dollar. How did you do a search for the Wave 1 on ebay. I don't even know what these are called. Also what figures were in the first wave?