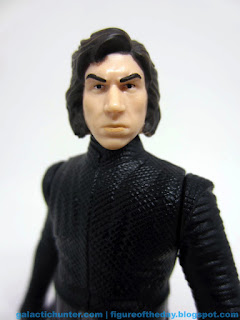 Bio: A dark warrior strong with the Force, Kylo Ren commands First Order missions with a temper as fiery as his unconventional Lightsaber.(Taken from the figure's packaging.) 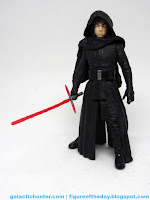 Commentary: He's back! And so am I! Kylo Ren both granted and robbed us of something great upon the removal of his mask.  We got to see that the bad guy in the movie was Han and Leia's kid, a hardcore original trilogy fanboy, and not quite as strong as his ancestors.   While clearly no one at Hasbro was taken aback by the character's popularity, I don't think Poe, Finn, and Rey went exactly as planend - so fans did jump on a lot of the figures, eventually.  The unmasked 3 3/4-inch Kylo Ren came and went in a rush, and for all I know there are more out there waiting to ship.   Heck, I'm almost sure of it - the secondary market price of this one us oddly high.   He shipped along with Nien Nunb and a Stormtrooper Squad Leader, with weapons that combine and form a... I don't know what.  These things are ugly.

Kylo Ren isn't much of a fashionista, wearing effectively the same thing in every scene plus or minus a helmet and a small hood.   Hasbro could have saved some money by taking one of the two previous sculpts and just swapping out the head, but they didn't - this new Kylo Ren has a different pose, different torso, different head, and pretty much different everything.   I admire their taking no shortcuts, but if ever there was a time where it would be appropriate it was this.  New tooling is short and Hasbro repackaged a few figures with new gear in this line - including from older lines - so why not here?  Are we really going to notice the fact that the robes are moved so you can get a better look at his boots and pant legs?   Is it obvious that he's making a Force-gesture with his left hand?  Does anyone - and I mean anyone - notice that the robes around his crotch were spread apart a tiny bit to account the new pose?  Probably not - but I admire Hasbro's attention to detail when doing something different. 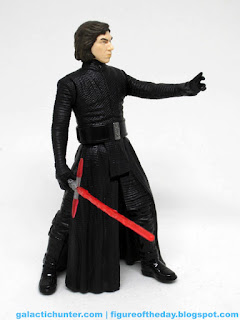 The figure has a head that seems a tiny bit larger than others - no doubt to not make it seem small on the figure's frame - and in real life he's an inch taller than Harrison Ford.  I have no doubt the scale was done in part because Movie Magic, but he is a bit on the large side.  If you don't collect them all this won't be a problem, he's consistent with other Kylo Ren figures, but he stands almost a head above Finn - and the height difference between actors there is about three inches.   Of course, size issues in movie years are pretty normal - it's when they get 'em wrong decades later that I get annoyed.  Those seeking a perfectly sized Kylo Ren may wish to wait for the next movie, because - let's be honest - he's gonna be back.  We love him too much.

His face is partially obscured by a hood, but you can pop that right off to see the Ken Doll take on Adam Driver.  The dude's got a distinctive head, to say the least - this downplays many of its more interesting features with clean, clear skin and hair that doesn't quite live up to the promises of a shampoo commercial like in the actual movie.  But that's totally his face, if a little paler than it could be.  The eyebrows are angry - a good fit for a villain, but when we see his face he's not always furious.  That's what the mask is for.   It's a good representation of Mr. Driver, but I have no doubt a few pennies could throw in a mole (or beauty mark or whatever) or two, perhaps a little more color on the face.  But it's not like his predecessors in this scale usually had such minor features, so what am I complaining about?  It's pretty good.   Also making this figure desirable, this is (to date) the only unmasked Adam Driver head in this scale - meaning if you want a Matt the Radar Tech figure, you're going to need to sacrifice one to the toy gods.  (An official one appears to be a licensing impossibility at the moment.  Plus the joke sorta ran its course, solid as it was.) 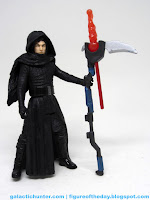 His bonus weapon stands alone nicely, but it's also completely ridiculous.  It's basically a cybernetic Grim Reaper scythe that shoots a missile.  Why?  I don't know.  But it does, and you can get it, I guess.  If you connect it to the other two weapons, you can build a big, ugly pile of weapons that shoots.   I assume someone was challenged by a manager to do this, and the end results are challenging indeed.   If you threw this in a parts drawer never to be seen again, you'd likely not miss it.  It's not a bad accessory, it's just something that adds to the cost of the figure and doesn't do the collector - and I would also argue the child - any favors.

You have every reason to buy this figure if you can find one - unless there's a better one coming for Episode 8, you will want to be sure you get this one when the chance comes.  At this point I would bet a small amount of money that Ross or TJ Maxx will get him.   I wouldn't necessarily pay the current secondary market asking rate, but then again I wouldn't want to go without him.   I can't wait until he has a vehicle!   This figure can stand and sit, but his wide stance will no doubt make vehicle compatibility an issue down the road.