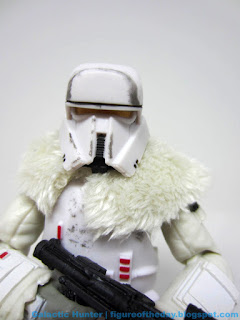 Bio: The Imperial expansion requires the settlement of vital operations on remote outpost worlds.  These frntier Stormtroopers form the bckbone of stubborn defense against would-be thieves or pirates.  (Taken from the figure's packaging.) 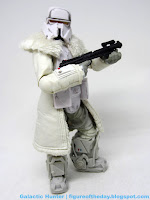 Commentary: The last figure I opened was the Range Trooper.  As of my writing this, I don't know what his deal is other than he looks like an upgraded Snowtrooper, which seems backward given the movie takes place before their first appearance.  The chest armor and kama look similar to the 1980 movie's Hoth soldiers, but the other elements pull from a variety of inspirations.  That helmet looks like some of the variants we've seen in Rogue One and Revenge of the Sith.  It's the first figure I've seen with a gold visor, and the code cylinders on his arms also seem like something I've never seen on a trooper before.  This looks more like a customized leader than a rank-and-file cannon fodder type, mostly because of things like that.  It has more personality than most troopers this side of the Grand Army of the Republic. 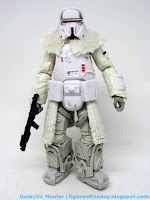 There's a big furry collar that sits over his shoulders, and there's an indentation behind his helmet that looks like a plastic one could have been glued there at one point.  I could see it fitting in - and it might have looked cool.  The faux-wool-lined "skirt" looks great, with some of the best soft and furry texturing we've seen on this scale of figure.  Padded layers, scuffs, and dirt indicate the trooper may have seen some action, with boots that look like some sort of cybernetic enhancement.  This makes them a little less stable as feet, but the boxy boots look different than anything we've seen on a humanoid Star Wars figure so far.  They're also, sadly, clean and kind of boring in terms of deco.  Scuffed paint or elements of grease would be cool, just to give us an idea of what they are and how they work.  Little blue and red marks near the calf muscle look neat, but are easy to miss. 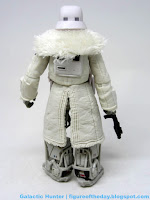 Articulation is fine, but with a bulky figure he doesn't benefit from the range of motion on Han or Lando.  Rather, the arms do get to bend more than the usual 90 degrees, but only just barely.   The kama restricts leg movement, and the arms' bulk prevent it from looking cool when double-gripping the variant Stormtrooper blaster.   You can get cool poses out of this guy, but it's not all it could be.   I love its personality and general vibe, but it's not as finger-friendly as the other figures from the wave.  Once I get a decent pose, I don't want to mess with it.  Other figures seem to offer a lot of great options, while this one just isn't as well-crafted in terms of articulation.  Deco and sculpting are still good, but the design may be at fault for making it less fun than young Han Solo, and I don't even assume I'm going to love young Han Solo once I see the movie.  I hope so, though!

It's good enough.  If you're looking for amazing, look elsewhere - the budget went in to making you a good-looking figure.  It's just not a lot of fun.