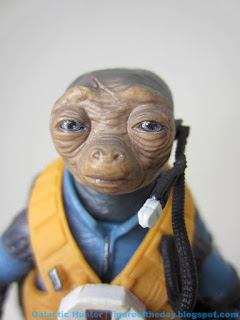 Bio: Rio Durant has carried out dangerous operations alongside the scoundrel Tobias Beckett for years.  The good-natured Ardennian pilot is up for any challenge, not unlike his young counterpart Han Solo. (Taken from the figure's packaging.) 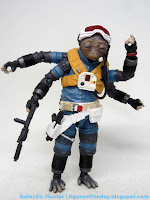 Commentary: I got a kick out of Rio Durant in Solo.  It's the sort of thing we should be getting more of - weird, colorful aliens with amusing celebrity voices.   He answered the question "What if Rocket Raccoon were nicer, had four arms, and also dead?"   In terms of the movie he wasn't nearly as funny, but the toy offered a lot more for basically the same price.  Having to jam in a lot more parts and pieces costs money, so even though this figure is a smidgen smaller it probably cost Hasbro just as much (or more) to make than a regular-sized figure. 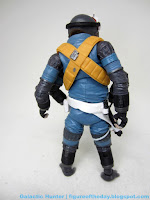 It's OK.  A figure at this size and price point has higher expectations.  Hasbro's $6-$8 6-inch cheap figures are pretty good no matter what - you get a few joints and some paint, and they're exciting.  At $20 or more, you want something really good.  Rio has nearly 4 points of articulation - that's good! But they're a little bulky, and with a smaller figure having four shoulders jammed into the back means you get a slight feeling of bulk back there. The ankles are impressive, as they not only rock but swivel just below the pant leg and also have that front-and-back motion everybody loves.    He even has removable goggles - they can't easily cover his eyes, but it's something.  I'd almost rather they be glued down, just so they don't fall off so easily, but that's me.  Your mileage may vary. 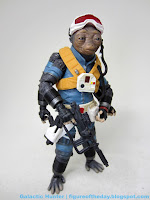 He has a big rifle that fits in his hands nicely, and a smaller pistol crammed in his white holster that's kind of a pain to get out. At first I didn't think it was going to come out, but you can move it around and carefully slide it out at some weird angle that's the kind of bad design we don't normally get from Hasbro. It's particularly surprising given just how well the holster itself is designed - Hasbro nailed it.  There's a strap around his thigh that' actually part of the leg, and the pouch for the blaster is a separate, rubbery piece with a peg that fits in his thigh - allowing you maximum movement range with minimal bunching and hindering of hip movement.  How did Hasbro simultaneously get it right and wrong so well in two opposing directions?

The figure is pretty good - there's not a lot of stunning texture here, but it's a space monkey with four arms and the kind of blue space suit you thought you might get as a toy from Rogue One, but Hasbro let you down.  I like the orange bandolier and the retro computer stuff, and the weathering on the belt is no slouch either.  Hasbro tried a lot of stuff here, and overall they did a good job with a weird design.  I'd like to see what they can do when they figure out a more clever way to cram in those shoulder joints, though.  Recommended if you can find it - especially at (or slightly above) retail price.  Yes, it's that interesting.  It's not necessarily fun, but I wouldn't give mine up.