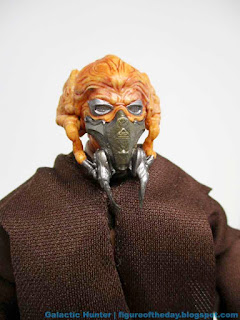 Bio: A Kel Dor from Dorin, Plo Koon was among the wisest members of the Jedi Order, respected for his level-headed analysis of events and unflappable calm.  (Taken from the figure's packaging.) 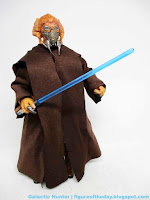 Commentary: If you've read my Star Wars toy coverage and ramblings over the last 25 years, you know I like to try to keep it clean.  In the case of Plo Koon in the 6-inch line I'm going to break that tradition by just letting you know it and a lot of his wave mates are kind of half-assed.   While Anakin and the Battle Droid are sensible choices to reuse a lot of existing tooling, Plo Koon is actually Mace Windu [FOTD #2,585] with new soft goods, a new lightsaber, a new head, and of course new hands.  Hasbro's factory sewed the cloak shut on the body and added a new neck piece below Plo's head, presumably to help keep you from noticing that it's just a retooled Jedi Master Windu.  Did it work?  I sure couldn't tell from the publicity photos, and there are so few good reference shots of Plo Koon without his robes that it's possible that most fans will never notice or care.   The new parts are all you see in the publicity photos or in an unopened box - so should you care? 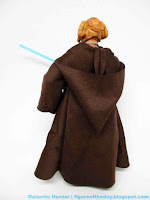 The new head, lightsaber, and hands are amazingly good.  The sculpted detail is tip-top, with pointy bits under his chin and nicely painted claws.     The alien mask has been replicated here nicely, with an exceptionally nice level of detail proving that when Hasbro (rarely) decides to make a new classic alien in this scale, they do an exquisite job translating rubber and latex to PVC.  I'm impressed.

The robes are all new here, and seem as if they may be inspired by Sideshow's figure.  The robes are very similar to theirs, and their figure also seems to have a belt and boots that match the other Jedi Master.   Coincidence?  In the absence of good reference, toys often become the de facto source of inspiration so it wouldn't at all surprise me if someone looked at the 1:6 figures - usually reference-quality stuff - and said "eh, good enough."   Plo's Hasbro robes have a hood hanging in the back, which looks great - but if you pull it over his head, it looks ridiculous. 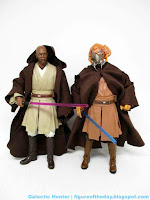 He stands fine, he holds his lightsaber just fine, and if you look at Hasbro's original Power of the Jedi take on this Jedi master... it's fine.  That figure just had a big robe and was basically a chess piece, and if you leave this figure's robes on and just leave him standing, he's fine.  The shortcut makes sense - but we've seen robeless figures from Attack of the Clones and beyond, and the colors and detail are different from this The Black Series release.  We're just now starting to see Hasbro completely resculpt its earlier 6-inch figures from 2013, so when I see Plo Koon I'm not sure if I should tell you to get it because it's all we'll ever see, or to wait for Hasbro to try and do it again from the ground on up.   The Star Wars 6-inch line has largely been good with minimal sharing of tooling (except on troopers or figures where it makes a lot of sense), which is quite different from what we see in Marvel Legends.   Given Marvel's line had build-a-figure parts - but a lot of reused tooling - I didn't complain that the two cost about the same.  If Hasbro is going to start taking shortcuts, I'd certainly like to see some build-a-figure parts introduced, or perhaps more accessories or display stands.   If you never open your figures or remove them from the robes on your shelves, though, this figure is fine and I expect you will have no problems with it.

Email ThisBlogThis!Share to TwitterShare to FacebookShare to Pinterest
Labels: Attack of the Clones, Jedi Knights, Plo Koon, Revenge of the Sith, The Black Series 6-Inch, The Phantom Menace