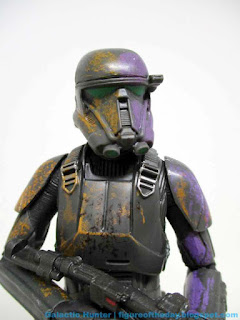 Bio: This distinctive collection features premium deco applications inspired by the end credit images from The Mandalorian, plus a collectible Imperial Credit accessory. After the fall of the Galactic Empire, usage of their form of money, Imperial Credits, became less common, with many planets refusing payments in the currency on principle. (Taken from the packaging.) 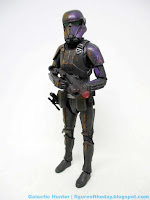 Commentary: While not named as such on the packaging, in conversations with Hasbro this line has been referred to as "The Credit Collection" so that's what I'm going with. In 2020 five figures were repainted and put on vintage/anniversary-style cardbacks including this Death Trooper as an Amazon exclusive. It's pretty good. IG-11 and The Mandalorian are also pretty distinctive, while it seems Cara Dune and the Heavy Infantry Mandalorian aren't as striking - but your mileage may vary. For this collection, Hasbro decided you should pay $5 more for some different paint and a plastic (not metal) credit prop replica. Is it worth it? Kinda.

I bought two of this line so far, mostly because of the back half of 2020 being packed with figures that, while distinctive, were not necessarily new characters or sufficiently different. It's one thing to buy 1 or 2 figures for completism's sake every year, but with 5 Christmas figures and 5 Credit Collection figures that could be a fast $250+ out of your pocket - so I decided, for the first time in 25 years, to say "you know what, nevermind." But I made an exception for Mando because it was so saturated, and the Death Trooper because it looked battle-damaged. (And IG-11, I still might get.) All of these guys make me feel like Hasbro is taking lessons from the sofubi and indie toy world again - this time it feels like we're getting things that may not be too out of place in the Glyos system. 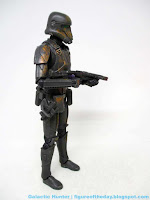 The Death Trooper takes the mold from way back in 2016 - which is still in some demand - and changes the coloring to match the end credits of The Mandalorian. Now cast in dark grey instead of black, the figure has striking green lenses, odd muddy smears, and some intense purple on the helmet. The blaster has some red highlights, making a few details pop. The pictures look fine, but up close it's striking and feels like more of a weird art piece than a collectible for aging man-children. The holster loop is still there - and weird - for the small blaster, while articulation is standard for 2016. 27 points of articulation await you, but I also can't help but think this paint could have looked just as god applied to a less-articulated figure or a statue. On a retro cardback, it's pretty nice - but the "vintage" look certainly has been about keeping the past alive, and this is more of a weird mutation.

For those of you contemplating buying one and leaving it in the packaging, I would say that's probably a good idea. The credit isn't much to gawk over, it's light and there's nothing of interest on the flip side. On the front you'll see an Imperial cog and what I believe is "ROWE." Presumably this is derived from Republic credits but I have no idea what the significance here is.

I don't regret picking this one up - it sort of fits in as a troop builder, but really, it's a unique art piece unto itself. I hope it inspires fans to pick up and paint figures in strange ways, sort of like that awesome The Vader Project and the similar Stormtrooper project. I like weird. (Christmas sweater-themed, not so much.)