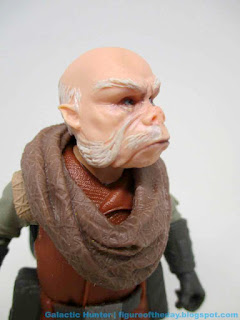 Bio: A vapor farmer on Arvala-8, Kuiil came to seek peace in an out-of-the-way world, which is now being trespassed upon by criminals and mercenaries. He has worked a lifetime to be free of servitude, and offers valuable skills for those willing to meet his price. (Taken from the packaging.) 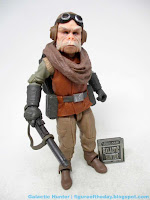 Commentary: Season one of The Mandalorian is an amazing parade of awesome weirdness. The ugnaughts were famously poor sellers in the 1990s, lingering on some drug store and Kmart pegs for nearly a decade, but Kuiil gave the species a voice and a catchphrase - and that's valuable. I never would have expected to see the little porcine people as a figure in The Black Series unless we got into a playset/diorama phase - but if you give one of them a name, that's a whole different thing. 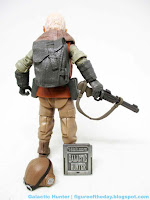 This is a good - if small - figure at 5-inches tall. It doesn't make you wince like a $20 Yoda - or Maz Kanata - because at least it's taller than most of the 3 3/4-inch scale line, and it has more parts. As always the sculpting is top-notch with wonderful textures on the skin, hair, and fabrics... all of which are plastic. The vest and belt buckle look great. The pouches? Awesome. And are those cargo pockets? Kuiil - you, me. The same. The colors don't bleed and I don't see a lot of slop here. It's a great clean design, but the trademark "used universe" weathering of Star Wars is completely absent. This is a squeaky-clean rural farmer and greasy repairman. I would have liked to see some more weathering, and while his face sculpt is perfect that could probably have also used a little more paint around the eyes. The personality is in there, but it's a lot brighter than the show looked - the eyebrows don't feel as wily or bushy. Or white. 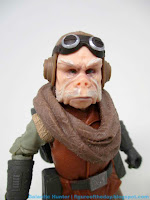 Articulation is acceptable - but not impressive. While Hasbro has done a bang-up job improving elbows and knees to have a greater range of motion and no visible pins on many figures, Kuiil's elbows barely bend. The knees are great though, and it seems the hips have a full range of motion that would be perfect for riding a Blurrg. (Have I mentioned I've been nagging Hasbro to make one of those on and off for years? You should too. They were good enough to fight Ewoks and Separatists.) Kuiil stands well, and oh yes - his hat is removable. His backpack is connected to his scarf, though. Kuiil's hands also have no problems holding his blaster once you pry the fingers open.

You will not be amazed by this figure - but it's good, and a sign that things have gotten to a point where Hasbro feels comfortable giving us some unusual characters that work nicely. I worry that the saturation of Mando figures is still too low that a figure like this could hang around - like how you wouldn't buy Killer Moth before buying a Batman - but perhaps it will show there's still demand for deep cuts (as well as casual selections) from shows like this as time goes on.

Now hopefully Hasbro will shrink him down for the Vintage Collection. I have spoken (sorry/not sorry).