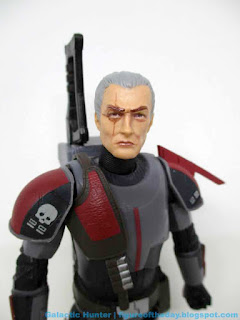 Bio: The Bad Batch, technically known as Clone Force 99 is the result of Kaminoan experiments to create a specialist unit of clone commandos. Crosshair is the time sniper whose sharp vision gives him superior accuracy and, as a result, an air of superiority. (Taken from the packaging.) 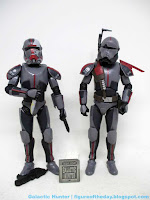 Commentary: They're all clones, but they look different - Crosshair has greying hair for some reason, and he does a good job of basically looking like his animated counterpart. While Hunter seemed light on deco Crosshair is missing, well, the crosshair on his helmet. I want to nitpick the change of his crosshair eye markings on his human head to a scar, and the complete absence of them on his helmet. Also his face and haircut look a lot more like a middle-aged Clint Eastwood type - whereas the animated figure has what could be described as a sort of severe bowl cut. Much of the wear and tear and light grey detail on the animated model were excised from the toy, so it's kind of disappointing. The lack of a painted target on his face makes logical sense - I mean, who would want a target on your face - but it's inconsistent with The Clone Wars interpretation of the character. This figure is excellent, but off-model, so it's irritating. 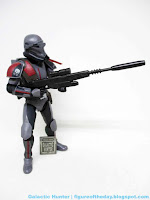 He can stand, sit, hold his guns, look cool, but sadly does not include the visual component which gives him his name. Were it not visible in the packaging art, I'd probably let it slide - but at least the figure is great otherwise. He shares parts with Hunter, but there are also new shoulder pauldrons, a new backpack, new belts, and a new bandolier. For a Clone, that's an incredible retool - plus he gets the aforementioned Eastwoodization of his previously Morrisonish features. Without reference to the cartoon, this is a gorgeous figure and a great design - it's also possible Hasbro designed this figure prior to the finalization of the animation model. 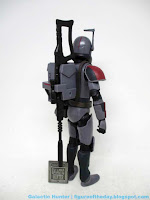 The figure's deco is good, but not great. The backpack is completely unpainted, and the animation model showed red striping and some scuffing. The pauldrons are missing some grey details, and there's a hole in his left wrist for where Hunter's knife sheath would go. There's no plug or anything, so it just looks like someone left a chunk out. Also like Hunter, there are tons of sculpted scuffs and scrapes on the helmet - someone put a lot of work and love into this sculpt, clearly unsatisfied to do a smooth model. Unfortunately the painters did not follow their lead, or perhaps it was just a budgeting issue. The red looks good, the grey is perfect, the face is totally flawless - for the figure. It's just not as authentic to the design as it could be, and given this is the adult collector line it kind of makes a difference. 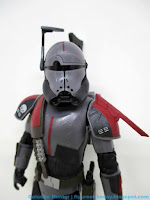 If Hasbro never revisits Crosshair, I'd say this is a good enough figure and maybe someone will release a sticker pack - or a paint mask - so fans can fix it at home. Normally I don't care much about a missing paint application or two, but once you mess up a helmet or a face it's hard to ignore. A nearly perfect figure comes up short, even though he has great features like on-board storage for all of his gear and a helmet with an articulated rangefinder. I don't want to pay another $23-$25 for version 2.0, but knowing Hasbro it may prove vital to do so down the road when new fans discover the show and this figure is long discontinued.