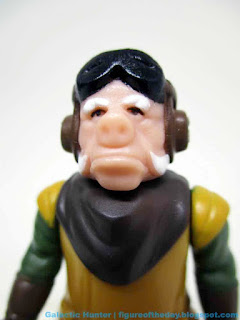 Bio: Kuiil was an Ugnaught male who had worked a lifetime to be free of servitude. He came to the out-of-the-way planet of Arvala-7 seeking peace, and worked as a vapor farmer who offered valuable skills to those who could meet his price. (Stolen from Wookieepedia. Packaging has no bio.) 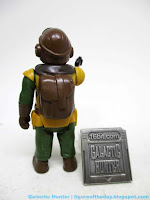 Commentary: Whoever designed this Kuiil seems to be a fan of the 1979 Kenner Cantina aliens. The figure is both good and bad, right and wrong, true and false. At first glance he's pretty much on the money, but the more you look the more weird liberties you see. This means they completely got the spirit of Kenner right, warts and all, and applied some artistic interpretation along the way. Sized to match the original Kenner Ugnaught from about four decades ago, the figure is actually more piglike than the mask used on The Mandalorian series.

You could stick this figure in a vintage playset, and it would fit nicely. His head is a snout - a smaller one than the Ugnaught, but more porcine than we saw on TV. The figure has a bit of an underbite, rather than an overbite, with different jowls and facial hair. Like the vintage Ugnaught, the neck can turn nicely and the arms and legs swivel without much fuss - but the head is in this weird valley between "close enough" and "not quite right." In many respects, it feels like the design came through a game of telephone, using incomplete reference photos. In other words, it's pretty much exactly what I would have hoped to get. 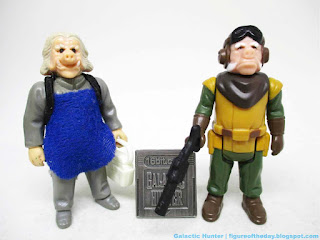 The outfit closely matches the show in design, but not in color - again, a great nod to the old Kenner figures. Hammerhead and Walrus Man were close enough in a pre-home-video world, and so is Kuiil - he's got some browns and greens on him, but not quite like this. The figure is much more saturated, and the mustard color doesn't quite mesh with what we saw in the streaming show. Similarly, each of the original Cantina aliens had numerous errors compared to their on-screen counterparts. I assume the inspiration for this entire line could be 1979-1980, given the proclivity toward vinyl capes, T-crotches, and the occasional "broken" hand that is incapable of actually holding any accessory by design. Kuiil's right can grip the blaster nicely, but the left was not designed to do so - much like the original Kenner Ugnaught... and Darth Vader's left hand, Princess Leia's left hand, Walrus Man's left hand, and so on and so forth. It's also possible this figure came from a weird style guide - Hasbro's The Black Series figure is more saturated than what my eyes saw on my screens, although the colors do seem to be broken out in a more precise pattern. 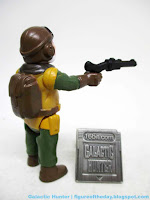 Also true to the old Kenner Cantina quartet/quintet, there are numerous missing (or simplified) elements on his person. The costume on screen is loaded with things like straps on his sleeves, with what appear to be buckles, and numerous layers of fabric they just plain left off. The costume has taller boots than the action figure too, with a fancy belt buckle and loads of additional detail. It's completely possible that this is Kuiil's laundry day outfit too.

I often liken much of this business to a joke - and sometimes, people don't get it. In this case it seems the designers completely understood their mandate, enhancing animal features on a figure while messing with the colors and departing slightly from what was seen on screen to give us a design that's more true-to-Kenner's best efforts of 1978 and 1979. It's not going to scratch the itch of The Vintage Collection fans, nor should it - this is a unique, weird designer art piece. It's great. If you see it for ten bucks and you're a fan of this kind of action figure, you should buy one. Most of Hasbro's competitors charge $18 or more (Super7 ReAction Figures) and indie efforts like Healey Made's Raiders are north of $25. $10 is a steal, given that these are made to appeal to fans of a toy line where much of its early days were sculpted before many of us were even born. I hope Hasbro continues to pump out many more of these.