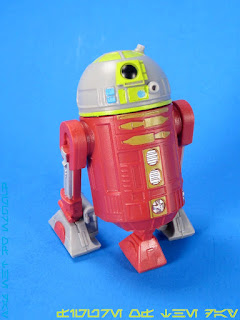 Commentary:  This is a "realistic" version of R7-A7, sold as an R2-Series Astromech Droid at Disney parks as part of the second wave.   It's roughly the same price as the original animated release on the secondary market.  The interesting thing about it from a collecting perspective beyond it being a debut in the "movie" style is that of authenticity.  Fans are given a choice - do you use the central maroon color leg to match the body - as this is the only figure that can pull it off - or do you go with the cartoon-accurate grey central foot?   That's pretty obnoxious, so maybe be real nice to the people at the parks and they'll let you take both.   This little fellow's dome has wonderful light green markings and a pair of light blue markings on his face.  The back of the head has a single red box, with most of the various panels remaining in unpainted grey.  The central "cap" panel is unpainted and has the hole for a hat that you all know and love.

The body of this configuration was retooled.  The lower holes on the R2 body were removed, so you can't make a four-armed droid anymore.  The maroon plastic body has grey and silver markings, and really doesn't work well with any of the other domes.  Heck, even with the "correct" parts it's still somewhat weird to look at with the other colors of feet.   The back of the body is largely bare, save for two painted silver details.

Each leg is new - actually, it's only one leg.   Disney had issues keeping enough matching right and left legs during the 2012 run, so I'm sort of happy that they found a clever solution to the issue.  Each foot has been redesigned so it's the same on the front and the back.  It combines elements from both the front and the back of the feet of the first ones, while retaining the wheels and dropping the wires.  As such it isn't perfect, but it's pretty good.  This pair of legs is maroon plastic with grey and silver highlights but with grey feet with maroon highlights.  I should also note that the arm was retooled so that the "rod" and "dots" on each arm have been removed and the "shoulder" has been smoothed out.   It's unique, I'll give it that.

The central grey (or maroon) foot for this (and all the other) colors is now unpainted, while the 2012 batch had silver markings around the bottom of the foot.   I would assume the foot may be gang-molded with the body, as there are grey bodies as well.   There's no real reason to have maroon central feet, so it's sort of infuriating.  Do you go for authenticity, or part completism?

If you got the "Vintage" 2012 Ahsoka, you'll want to get her a droid.  This is it - and man, are we overdoing it on the droids.  And I like droids.   25 in a year - over 2 months - is excessive.  There's a rumor of a third wave this year and I pray it doesn't come to pass mostly because I'm having difficulty enjoying the ones I've got.  I still need to secure R4-D23 and the Holographic R2-D2 this year, in addition to any surprises we don't know about yet.  I appreciate this figure ticks one more off the "made in animated style but not movie style" list, of course I'd be willing to bet we will never see all the figures from The Clone Wars in "realistic" style.   I like this colorful droid, and if you can swing it I'd say go get it.    It's cool.  You'll like it.