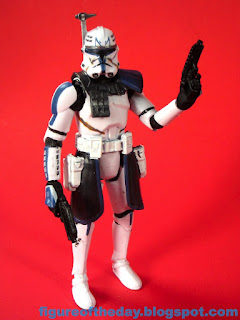 Bio: Captain Rex is a tough, free-thinking Clone Trooper who leads the 501st Legion under the command of Jedi General Anakin Skywalker during the Clone Wars.  (Taken from the figure's first release packaging. Later releases have no bio.)

Commentary:  Few figures get multiple versions, and fewer still go unreleased.  This Captain Rex is in a category with both - it's based on the third season of the Clone Wars redesign, but what's really interesting is a) that outfit got a figure in Saga Legends in 2012, and b) a Phase I armor version of this figure was aborted from a planned release in 2012.   That one was based on the "Clone Captain" (Fordo) figure we know and love, while this one is a different sculpt.  He doesn't have a cloth kama, but he does have holsters for his twin blasters and a helmet that I would say is a bit too tiny given that there should be a human head under there.  It's still a decent figure, but the Clones of this figure's wave vary in height and size - which is a no-no if you're dealing with Clones.  I'm pretty sure it's the first rule of Clone Club - Thou Shalt All Be the Same Height as Jango Fett.  The second rule of Clone Club is probably Thou Shall Get Repainted. 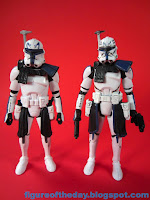 As mentioned the other day, one of the (un)fortunate things of modern "collector figures" is you know what you should expect - about 14 points of articulation.  You'll probably get bend-and-swivel wrists or rocker ankles, but on Rex you only get the wrists.   His legs can swing forward so he can sit, or he could depending on where he's sitting - the plastic kama doesn't have much give and could get in the way of some vehicles.   Deco is pretty good, but when you apply thick white paint over a dark plastic belt it does sometimes look like he had an accident with the Liquid Paper.   That's really all I can say bad about his deco, because it's really good. 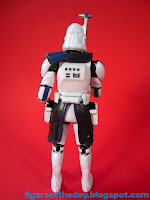 Budget reasons kept the layer of grime off, but look at everything else - there are kill marks.  There are bits where it looks like bits of armor were customized and welded together.  There are gashes, scuffs, and even the panels on the back of the armor were actually painted in!  This is very uncommon.  The number of tiny, clear paint applications is huge and they all turned out pretty well as toys - remember, this is a Hasbro toy and not a $200 replica - tend to go.  I'm sure a customizer with some sort of dry brush skills can convert this into the most gorgeous thing ever - perhaps with a head swap, too - but as it is it is a pretty great technical achievement.   Given that Hasbro billed The Black Series as the best of the best, expectations are high and it's easy to be disappointed with anything that isn't perfect.  This isn't perfect - but it's very good, and better than the very good and fun Saga Legends release.  (Who, by the way, does fit better in some vehicles.) 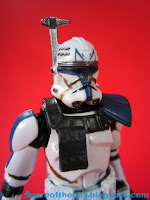 If you've been with us since 2008 you no doubt have several animated and realistic Captain Rex figures, as well as various ARC Troopers that look quite similar dating back to 2003.   If you want more, this is a good one - the metallic bits and the pats that look like they were burned by a torch are really impressive, even if the figure itself could probably have used an extra 11 cents worth of paint to achieve perfection.

Budgets being what they are, perfection may be beyond our reach but at least we can get some good figures out of this line as it may be driven off into the sunset by the next generation of Star Wars and the advancing age of the fanbase.   (There aren't a ton of collectors over 40.)