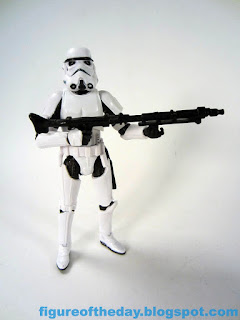 Commentary:  When it comes to "just different enough to make you mad" figures, my preference is for them to be troopers.  This Stormtrooper is it.  It's the Black Series figure from earlier - which is basically the Dewback Sandtrooper from a few years ago - with a different (arguably better) helmet.   The good news is that it's an improvement, but you'll notice elements of the old Sandtrooper are still present like the slot to plug in a backpack.   His body is also slightly different, as now it has painted black dots on the belly under his chest armor.  That's a big plus, too. 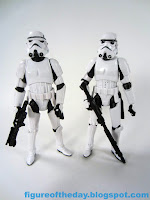 If the different helmet wasn't enough - it should be - it's not like you couldn't use a few more Stormtroopers anyway... unless the reality of no Death Star after 20 years, or a Star Destroyer, or any playset to actually use with all those armies you wasted thousands of hours and dollars tracking down.  But I digress - this is arguably the best 3 3/4-inch plain Stormtrooper on the market today in terms of looks and functionality, even if the hips look a little weird they do work well.   I suspect Hasbro has a better version somewhere in those archives that may some day see the light of day, but until then this one is a worthwhile purchase if you need more troopers.  If you don't already know that "new helmet = must buy" for your collection, be happy with the Stormtroopers you have and save your money for the new ones from The Force Awakens.

Helmet is much better, but did they lose the awesome E-11 blaster? That was the prize of the last release. At 10-15 bucks a pop there's no way for the average joe to army build a Falcon scanning crew scene again. It'd be nice if we could buy those superior blasters in quantity