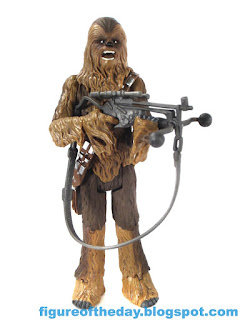 Bio: Chewbacca stands with his friends Han Solo and Luke Skywalker at a ceremony to regcognize the Rebel Alliance's victory at the Battle of Yavin.  (Taken from the figure's first release packaging. Later releases have no bio.)

Commentary:  After writing literally thousands of action figure reviews, I very rarely am surprised by Star Wars 3 3/4-inch figures.  Hasbro has fallen in to a fairly predictable pattern of crowd-pleasing figures with 14 figures and a good sculpt - with many reusing parts whenever possible.  Chewbacca was one that surprised me a bit - not only because he had a new head, but because it seems to have really changed up his look and feel.  He has really dark brown fur on his thighs, but also the interior of his hands are painted.  The bandolier paint is a little sloppy, but it's all silver rather than alternating between lighter and darker ammo packets.   Do you know what that means?  This is the actual update to 1978 Chewbacca.  The head is right, the bandolier is right, and it's just a little weird.  The eyes are good, the fur on his head is good, and there are no bizarre highlights to weird you out.  If you're building a display of "the best update" to the original 92 96 99 movie action figures, this should be your go-to Chewbacca.  It makes uses of the best-yet body (effectively the 2004 Vintage one) with a new head and new deco.   You'll like it. 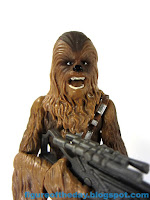 This isn't to say it's perfect - mine had some bandolier slop, and the waist joint is weak.  If you make him sit, it's very easy to pop him in half at the middle.  It's just as easy to pop the joint back into place, but this sort of "feature" sort of kills the fantasy, given you just killed him.   Chewie has no problems holding his weapon with both hands, although the weapon has the little piece in the front that may fall out if you aren't careful.   As an advocate of never painting/gluing/changing your figures, I'm considering adding a dab of Krazy Glue to keep it in place.  I won't, but I'm considering it.

I assume we'll get a better version for The Force Awakens, but as far as "let's update the original Kenner figure" goes this should be one you track down.   He looks angry and he doesn't have weird streaks.  You're going to have a hard time improving on it, and these little changes shows me that Hasbro really does care about a lot of those strange little details that appeal to older fans.  The unfortunate thing for them is that it means I now expect them to do this with more figures.   Figures like a Power Droid, or Imperial Dignitary, or Bespin Security Guard.   I'm happy with this Chewbacca remake, and now that Hasbro basically nailed it I hope they also do us a solid and retire this body construction as it has provided the basis for multiple Chewbacca toys since 2004.  Let's see what's next, shall we?