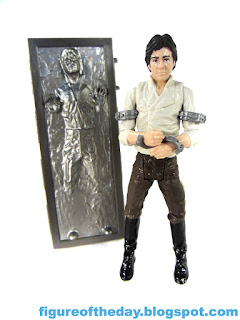 Commentary:  A little history - I was pretty young when Star Wars died as a toy line.   I only saw Luke in Stormtrooper Disguise and Han Solo in Carbonite once or twice as a child, so I didn't get a chance to buy them - and there were a few years where, because of no internet and no magazines and no books, that I wasn't sure they really existed.  I looked around a lot, and as soon as I found evidence on a cardback at an antique show I made it my goal to get the frozen Han Solo - as such, that first "get" at the princely sum of $15 in 1990 was a huge deal, just like getting the 1996 remake and the 2006 remake were milestones for me.  Kenner (and Hasbro) have been good about making about one carded version of this figure every 10 years, give or take a year - this decade's version is no slouch.   It's a little weird, but you know, binders.  They don't usually work right. 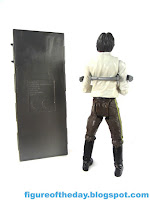 As a kid, I found this figure as fascinating as my parents found it disturbing.    Irvin Kershner's design direction resulted in a frozen moment in time taking the physical form of a space sarcophagus.  This rectangular coffin was an electronic, 1980s, colorless update of one of the most famous artifacts in Egypt and served as sort of Schrodinger's Smuggler.  Was Han alive or dead?  We were told he was alive, but we couldn't be sure until someone opened it years later.  That's a hell of a powerful cliffhanger, and the "frozen" toy with a Han inside was kept from fans for years after he thawed out.   To date, they've all been fascinating figures - the first was clear so you could see Han inside as it "melted."  The second had a waist clip to keep Han inside, balanced perfectly so the block would stand freely on a table without support.   The third had a clear red face, as if it were just switched on right in front of our eyes.   This one is unique in that it's the first one explicitly designed to be from The Empire Strikes Back with a fully-frozen silver block, Han's cuffs, and no weapons from Jabba's palace.  It's also worth noting that his collar matches the movie and its pose more closely matches the Carbonite block than other releases - an impressive slathering of vaseline over the lens of reality.

The block itself is molded in grey with silver paint on the face and the button panels on the side.  A few of the individual buttons are painted black and blue, too, which is really nice and a lot better than stickers.  While hollow, this block commits the one great sin - you can't open it and lock Han inside.   This has been one of my big complaints since the first figure I got when I was much shorter, you could never actually close the block that Han comes with over the figure.   There's not much I can do about it, but it always bugged me from the perspective of a toy.

The Han figure seems to be all new construction with 14 points of articulation.  It also goes to show that articulation won't get you everything - how the joints are cut, and how the accessories are designed, these things matter too.   By itself, this is a great Han Solo figure.  He has swivel arms at the sleeve, the elbows are pretty good, and the ball-jointed ankles make me think this figure could have been designed a few years before its release.   Everything is where it should be, with ample wrinkles and the ability to pose him as a little less assured, a little more roughed up than his usual appearances as a toy.   Hasbro did a good job posing his shirt collar so it matches the gaffe sculpt on the actual block, which is most appreciated - it serves both masters nicely. 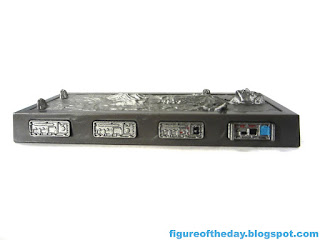 As accessories go, I'm a big advocate of throwing them out if they don't work right.  It's not worth spending the money if they aren't any good, and in this case they're not as good as they should be.  The wrist binders are dang near impossible to get on both wrists, although it is possible to photograph the figure to make it look like they fit well.   The arm ones are weird, with big open gaps in the back that stretch out funny.  Of the two they're better, but they're still not great.    I appreciate that they were included for the first time ever in a 3 3/4-inch action figure, but the set just doesn't quite work right.   Interestingly, Hasbro's design for the arms works better than the wrists - it provides a better illusion of being bound.  The wrist cuffs are going to be open on one side, regardless.  More of an "m" shape would have worked better.

I do not expect to see a new "toy" version of this.  An ice mold with a "melting" feature, or a red LED bulb, will probably never come thanks to action features costing money and prices going up.   It's easily the best "collector" version of this figure yet, and even if you have the previous versions this one offers enough new and interesting to be worth your while.