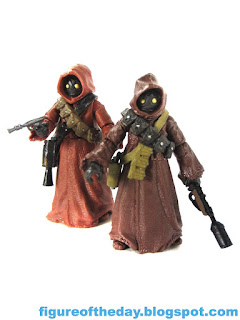 Commentary:  One of the best innovations in the modern era of Star Wars toys - that is, 1995 to the present - is Jawas as a set.  From 1996 onward, Jawas are rarely packaged alone.  Sometimes you get a Jawa and a droid, other times you get a Jawa with another Jawa.   Back when figures were $4.99, this was a friggin' steal - and today, it's still a great deal.   With two new sculpted figures with poses that look more like shrugging, each Jawa is a great addition to any clan you have built up over the last couple of decades.  This figure set is similar to the more recent releases, in that Hasbro designed it in a very sensible manner.  They didn't waste time and money with leg joints, and you got decent arm articulation.  Between the two figures, there are 16 joints.    It may not sound like much, but when you realize there's zero chance of sitting in these robes I'm glad that Hasbro didn't waste money on them. 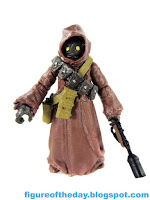 The detail on the fabric is great - at first glance I was wondering if I was looking at output from a 3D printer, because there's so much texture here that it seems like the extruded lines from one of those magic boxes.   As sculpted fabric texture goes, it's genuinely impressive - just running your finger over it, it's obvious that it's a very different level of quality over what you usually see.  Each figure has a full range of motion at the shoulder and elbow, with a swivel wrist.  Tall Jawa sports a holster for his big ion blaster, while Small Jawa has a holster for his tiny blaster.   Each sports unique bandoliers, neither of which seem to be removable without a fair amount of cutting.   The taller one seems to have a better pose overall, the small one seems particularly awkward when holding his ion blaster. 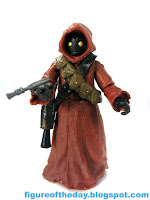 When it comes to deco, Hasbro keeps it simple and I'm glad that they did.   Neither figure has a black wash over it, so it doesn't look super filthy.  Eyes are painted yellow, and each ion blaster has some brown on the grip to bring it to life.  Painted pouches and straps add a limited sense of realism, and the unique sculpts seem a little malformed in a way that matches some of the weirder set photos.  The previous ones were a little too perfect, these ones may be more in line with some of the odder shaped Jawas in Return of the Jedi.   No matter what, you're going to need more Jawas, so be glad these ones are all-new.

Doing a good Jawa figure seems easy - even wrong, it's going to look good if the colors and hood are basically right.  Seeing Hasbro add more sculpted detail and better accessories improves these desert scavengers greatly, even if we're well beyond needing new versions at this point.   Army-building may be difficult for this last-wave set, but if you've already got a solid squad of them you'll be happy to know these are good additions to that shelf.  It's also worth noting that the Tall Jawa may well be the tallest Jawa to date at a hair over 3-inches tall.  If we're being nitpicky, Hasbro could still give us two more flavors of Jawa - we've had a pretty close update of the old "vinyl cape" version, but we've never had an all-cloth robe version in the modern era.   I don't believe they'll get to it at this point, but if they are looking for excuses to do more Jawas the Kenner-style ones are still out there.