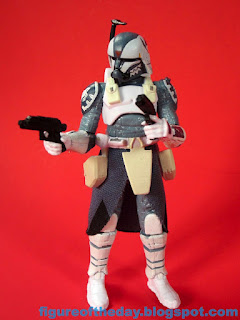 Bio: Leader of the Wolfpack Squadron, the clone commander wears specialized desert gear on a mission to the sand-swept moon of Oba Diah to find a missing Jedi shuttle.  (Taken from the figure's packaging.)

Commentary:  While scale has always been an issue in this line - R2-D2, Boss Nass, and Wicket come to mind - Clone Commander Wolffe is both great and a bit of a disappointment as another entry into the size wars.   Size matters not, we've been told, but when it comes to Clone Troopers size is kind of an issue.  The idea of a single soldier template means that for mass-production of gear, you really don't have to worry about too much variation on size.   Wolffe is about a head shorter than the Captain Rex we looked at last week from the same wave, which is a crying shame because this newly-sculpted figure is gorgeous.  It's one of Hasbro's absolute best, and the gosh-darned thing is too short.   Depending on how you display your toys you may be able to downplay this issue - carded fans may never notice, for example - but for the openers who shelve these things, this is kind of obnoxious and the kind of thing that normally wouldn't even come up in most licensor approvals.  Who's going to sit there with a ruler when there are Pantone swatches to match? 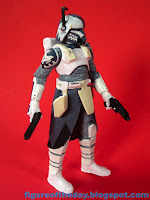 That's part of what makes this figure so infuriating. It's great!    If it was bad, it'd be easy to write it off because of the height issue.   The sculpting is very good, as he has bend-and-swivel wrists plus classic ball ankles and articulation that's on the happy side of what you could expect over the past few years.  He's got ball-jointed hip joints, too.   As an added bonus, he also has the unthinkable - a soft goods "skirt" that actually looks great thanks to the use of a much thinner material.  And working holsters.  And two blasters.  And a nicely-painted antenna, with a removable backpack that is also decorated nicely.  Little painted markings on the helmet only augment the awesome wolf motif, so what you have here is a well-executed figure with pretty much anything you could ask for except rocker ankle joints. 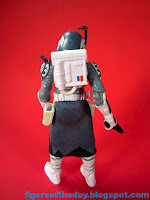 Given that he's part of a squad from the show that will likely never be completed, he's a fun little one-off and arguably not essential to any collection.  The schism between "animated" and "realistic" has been a source of frustration for many - me included - because there's really no perfect way to organize and display figures from differing series and differing styles.   It's still very good, and with the increasing prices it's nice to see figures like this where you can see how Hasbro used your money to make a product that is, on the whole, superior to their other offerings.  If you're a fan of the cartoon, and realistic figures, this is a good one.  If you find this sort of thing maddening, that's OK - it's not like you're going to see this one on shelves much ever again anyway.

I recently got all the new Clone Wars troops for $7 at Fred Meyer! The same price as before the dark times.

So is the height problem in the legs, or the torso?

I would say the torso.