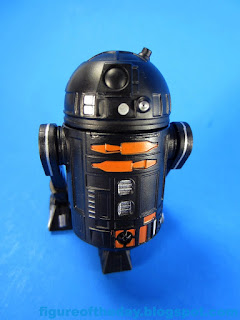 Commentary:  While not identical to any existing figure, the R2-Series Astromech Droid is strikingly similar to 2001's R2-Q5.  The layout and colors are almost identical, but the faded orange is much more vibrant and a couple of other things changed.    The holo projectors on the dome are slightly different, as this build-a-droid version has painted silver interiors on the front one and the one on top of his head - R2-Q5 2001 had silver on the front and back.   Other than that, they're pretty dang close, except the 2001 version is incredibly glossy and therefore more accurate.   Since the 2001 version's feet was pre-sculpted-wires protruding out, each is pretty good but not perfect.  I'd give the 2015 black droid the edge on being gorgeous, but the 2001 release the edge for authenticity.   In other words, there is still room for improvement on the droid who would be R2-Q5. 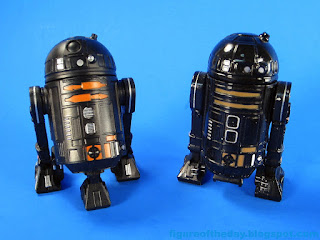 It's an interesting one.  It's different enough - not glossy, more vibrant - where I could say it could function as a new droid in your displays or dioramas.  It's also R2-Q5ey enough to substitute for the droid had you skipped the 2001 version.   I like it because of the colorful panels, but you may prefer to get it with the R4 or R5 domes to add some variety to a non-completist shelf.  It's $13 worth of neat, but it does sting a little that we used to get a part with each $8 figure a few years ago.   I'd still buy other new ones if Disney makes them, though.