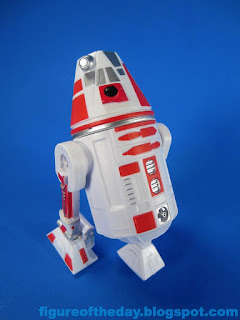 Commentary:  As far as I know, this R4-Series Astromech Droid is an original design for the theme park.   The red and white body is paired to the R5-D4 head, the markings may even remind you of R4-E1 at first glance.  They're quite different - the dome's markings are almost the same template as the MKII Blue R4 droid dome earlier this year.  The same silver markings and "A" pattern are present, as are the other shapes all over it. There's only two real differences in the dome pattern - the top of the blue dome has a border painted around it, while on the red version, it's white.  Also, the red version has an added silver ring around the "neck" base.   It's distinctive, unique, and able to be configured any way you see fit. 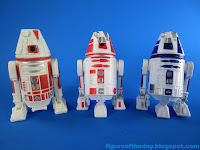 The body of this configuration was retooled from the pre-2015 editions.  The lower holes on the R4 body were removed, so you can't make a four-armed droid anymore.  The black matte plastic body has orange markings, plus a couple of silver boxes for good measure.   It works well with other domes in the collection, of which three.  By and large the paint applications mimic the Hasbro Power of the Jedi R4-Q5 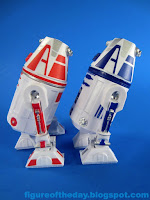 Each leg is new - actually, it's only one leg.   Disney had issues keeping enough matching right and left legs during the 2012 run, so I'm sort of happy that they found a clever solution to the issue.  This pair of legs is white plastic with red markings where the toe wires used to be present.   Extra red panels were added on the feet, where we usually don't see this kind of decoration.  It looks good, and it is distinctive.

Is it essential?  Not necessarily.  However, the red R4 is arguably more interesting than another red R5 so I'd say yes.  The unique shapes of red on the feet and the distinctive red body panels make this a nice configuration, a good build to go with the dome if you ask me.     The white-and-red R2 dome would also be a great choice.  Heck, maybe better, but I like this one plenty.